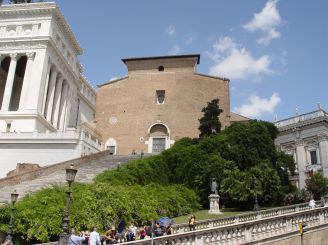 The highest summit of the Capitoline Hill in Rome is crowned with an enormous Romanesque-Gothic temple. It is the Basilica of St. Mary of the Altar of Heaven (Basilica di Santa Maria in Aracoeli). The church is located between Altare della Patria and the Senatorial Palace. Religious architectural landmark, a pretty unique for its age, managed to preserve its original look since 1250. Massive walls helped this medieval basilica survive through many changes of government, religions, and epochs.

Previously in the ancient times, basilica’s spot was occupied by the temple of Juno Moneta. This is where names for Roman, English, and Polish money derived from later. An ancient Greek monastery used to be here as well from the 7th to 9th century. During medieval times the area at the Basilica of St. Mary of the Altar of Heaven was chosen as a place for public assemblies. In the 14th century, stairs were added to the church that had 124 steps in total. The Statue of Cola di Rienzo, popular tribune that opened the basilica can be found on the way to the place itself.

The building you can see today was built out of remains that once were ancient constructions. It is a quite simple-looking church. Its austere façade is decorated only with rose windows. Interiors can, however, boast richness.

Inside you can find:

In History of Rome Livy describes a famous legend. A beautiful story about the geese that saved Rome. Once upon a time sacrifices were performed in the ancient temple. Traditionally, people brought geese that were raised at the church itself on the altar as an offering to June. In 390 BC Rome was encircled by the Gauls. These events took place late at night, and no one except for the geese heard the danger. They started honking loudly and woke up guardsmen. Thanks to that Romans managed to survive the attack.