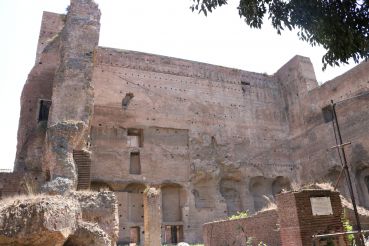 Santa Maria Antiqua Church is an ancient dilapidated church in the heart of Rome. It is part of the Roman Forum complex. It is famous, first of all, for its skillful frescoes of the Byzantine period, which have survived to our days in good condition.

The Santa Maria Antiqua Church was built in the middle of the 5th century on the north-western slope of the Palatine Hill. It became the very first Christian building of the Roman Forum. In the 7-8 centuries, the temple was richly decorated with wall murals. The works were ordered at different times by various Popes.

In 847, Rome suffered from an earthquake that destroyed the church. It was buried under a layer of earth and was completely forgotten. And the pontiffs built the new church called Santa Maria Nova. Only the atrium remained intact, but it was also plundered and destroyed in the 11th century. In 1617, a small chapel of Sancta Maria libera was erected on the site of the former church. In 1901, in the area of ​​the Roman Forum archaeological excavations were conducted, during which they discovered an ancient temple. After that, throughout the 20th century, excavations were conducted here regularly. And from 1980 to 2016, restoration work was carried out in the church. Finally, in March 2016, it was open to visitors.

The church is surrounded by other buildings and ancient antique streets on all sides. Its façade is made out of bricks, in its center there is a large arched passage. The central nave is covered with a gable roof made in 1910. You can get to the atrium by passing through the remains of the loggia. It is a large square courtyard without a roof. Until the 9th century, there was a monastery cemetery here. The atrium, like the interior, has many frescoes from the 10th – 11th century. All of them are located in the niches of the walls.

A vestibule under the arched passage leads to the central nave. The nave is separated from the side aisles by 3 arches on each side. At the end of the nave there is an apse, and at the end of the side aisles – small chapels. The floor of the church is made in the Cosmatesque style, and decorated with geometric patterns of polychrome marble. In the right passage there are 4 old sarcophagi. They are richly decorated with marble bas-reliefs.

The frescoes of the church were carefully restored as a result of the work. Many of them are the overlay of newer ones to old ones. The frescoes of the apse illustrate a series of events in the New Testament, and in the chapels there are images of saints and prophets. On the walls of the central nave there are many events described in the Gospel.

The Santa Maria Antiqua Church is located in the historical center of the Eternal City, on Via di S. Teodoro, 1. The complex of the Roman Forum stretches around it, not far from it there is the Nuovo Palace and the Capitoline Hill. The nearest bus stop is Fori Imperiali (routes 85, 87, 118).

Admission: the church is a part of the Roman Forum complex. The price of a full ticket is 4 euros, with a discount – 3 euros. Every first Sunday of the month visit is free. Visit data may vary.