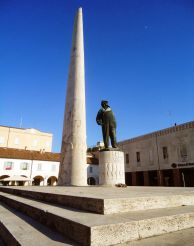 The monument to Francesco Baracca (Monumento a Francesco Baracca) is the most famous monument in Lugo, it is considered to be one of the city symbols and the decoration of the central square. Moreover, some believe that this is the only metaphysical monument in the entire world. It is dedicated to the outstanding son of Lugo that was known in Italy and outside of it.

Francesco Baracca was a military man and, after going through the World War I, he became a true professional. Before it, he served in cavalry and then mastered the art of flying fighter jets. Over the years Francesco turned into an ace and the best Italian pilot. He won 34 aerial battles, but didn’t manage to survive the 35th and was shot down in 1918 above the Montello hill in the Veneto region. Numerous streets, squares, and airports were named after Francesco Baracca to honor him. His unit’s emblem had a griffin depicted on it and his personal one – a prancing horse. This was the symbol that later became the most recognizable one all over the world – Italian pilot inspired Enzo Ferrari to decorate the hoods of his sports cars with it.

Right after Italian flying ace died the fund-raising for the monument began. The committee led by the Duke of Aosta put Domenico Rambelli, the sculptor from Faenza, in charge of the project. He started working on it in 1927 and finished only 9 years later. The statue was installed on June 21, 1936. It became quite an impressive piece of art.

In the middle of the city square, at the monument’s bottom, there is cobblestone paving that is covered with Tivoli travertine that takes up 1040 square meters. Several long steps are leading to the statue itself. The bronze sculpture is 5,7 meters high. The man is depicted standing in full length in his pilot suit. The whole artwork is put on the 4,3-meter plinth made of white marble. You might notice dates and places of his 34 victories engraved on it. There is a 27-meter high huge plane wing rising behind the sculpture. It is also made of white marble. Bas-reliefs with griffins and the prancing horse – symbols once put on Francesco’s plane – can be found on each of its sides. You might also notice his motto «Ad Maiora» near the horse.

The monument to Francesco Baracca is located in the center of Lugo, on Piazza Francesco Baracca. There are other famous landmarks around, for instance, the Estense Fortress. Railway and bus station are only a 10-minute walk from here. The central city of the Ravenna region is 30 kilometers away. You can get there by bus or train that travel between the cities.