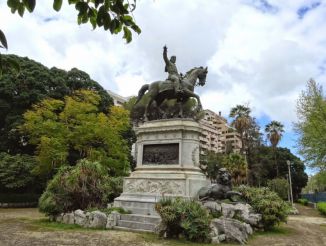 Equestrian statue of Giuseppe Garibaldi is a monument in honor of the Italian commander, revolutionary and politician. It is located on one of the central streets of Palermo – Via della Libertà. Giuseppe is the national hero of Italy. The main aim of the politician was the unification of Italy. The national liberation movement was called Risorgimento and ended in 1870, Rome was annexed to the Italian kingdom. In history, the name Garibaldi became synonymous with courage and fearlessness.

In front of the sculptural composition is a lion tearing the chains. The authorship of the equestrian statue belongs to Vincenzo Ragusa. The sculptor portrayed the horse while walking, sitting on which Giuseppe utters the historical phrase: «Nino, tomorrow – in Palermo!»,wich addressed to General Nino Gerolamo Bixio.

The monument to Giuseppe Garibaldi is located in the central part of the city, so it is not difficult to get there. Public transport routes are laid: bus № 101, 102, 106.