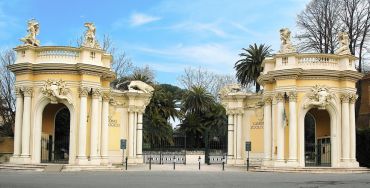 Bioparco di Roma is a green part of Rome, partially located on the territory of the former country estate of the Borghese family. This is an unusual zoo where you can learn to love nature. Animals are in the most comfortable conditions. Here you will see more than 1000 animals of more than 200 species. The zoo was opened in the early 20th century.

History of the Bioparco di Roma

The zoo was founded in 1911 and covered a territory of 12 hectares. At that time the park was very modern, because animals could move freely in it. Then it was a wonder, compared to other zoos.

In 1935, the territory of the park was expanded to 17 hectares. The architect Raffaele De Vico worked on the design. At that time, a house for reptiles and an aviary for birds were built. They are unique in their form and nowadays.

Contribution to the environment

Bioparco di Roma is one of the oldest zoos in Italy. It plays an important role in the conservation of some rare species of animals. Also, workers of the zoo care about ensuring animals the wildest conditions. Zoo animals do not feel trapped in a cage. The staff monitors the development of each animal. For example, food is not poured here in a certain place. It is hidden, so that animals seek their prey in the same way as in the wild. It perfectly motivates the animals and entertains the visitors. For the same reason, visitors to Bioparco di Roma are forbidden to feed animals.

The staff of the zoo also sets itself an educational task. Bioparco di Roma works closely with schools and kindergartens. From an early age, they teach children to love and appreciate nature. On the basis of the zoo, exhibitions and seminars are often held. Here they will show you in an accessible and fascinating way how each of us can take care of animals.

In the zoo, you can see the usual for us chimpanzees and gophers. Also there is the opportunity to admire the grace of the lynxes and tigers. Children are delighted with the majestic elephants and long-necked giraffes. For fans of thrills, there is a hall with reptiles.

Opening hours: the zoo is open all year round, except on 25 December. The time of visit depends on the season:

It should be noted that the last visitors are allowed to get in the zoo an hour before closing. But at this time many aviaries are already closed due to the peculiarities of keeping animals. So it's better to come in the morning.

For children less than 1 meter in height and for people with disabilities admission is free. In advance, you can book an excursion to a group of 15 people.