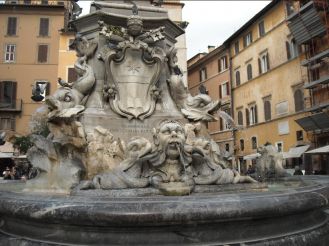 The Fountain of the Pantheon on the Piazza della Rotonda in Rome is one of the most popular sights in the city. With the light hand of Pope Gregory XIII and the performance of Giacomo della Porta in 1575, Rome acquired one more gem. Leonardo Sormani worked on sculptures.

In 1711 Pope Clement XI instructed Filippo Barigioni to modify the fountain. So, a new pool of stone, and the Egyptian Macuto obelisk of the times of Ramses II, decorated with sculptures of four dolphins were installed in the center of the pedestal.

At that time there was a market in the square where different goods were sold: from products to various trinkets. Merchants used a fountain for storing fish and cooling perishable foods. This adversely affected the appearance of the fountain and, in particular, water. Several times there were attempts to liquidate the market, they fined the traders, but they were not scared and returned to their places. This goal was achieved only in the middle of the 19th century. Then a fence was placed around the fountain. Nowadays the fence is removed.