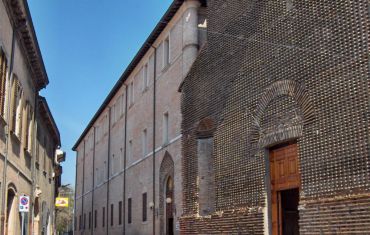 The Rimini City Museum (Museo della Città) brought together the centuries-old history of Rimini. It offers a vast collection of medieval artifacts and Renaissance paintings. This is not an ordinary museum – it has an archaeological section which boasts pieces found in a quite interesting landmark called the House of the Surgeon that dates back to ancient Rome and where a prominent medic used to work.

History of the Rimini City Museum

The building where the museum is currently housed is adjacent to the 18th-century church and was built in 1755 by the design developed by Alfonso Torregiani. Since the church was Jesuit, the new construction became the college for this order. In 1773 the Episcopal seminary was established inside it, then in 1797 a military hospital and public one after were set there as well. During the World War II, the palace was damaged. In 1986 it was decided to create a municipal museum. Local authorities bought the former hospital in 1979 for exhibitions and that’s when major restoration works started.

In 1981 a the first section with the lapidary collection was opened to the public. The museum itself, however, was opened on July 12, 1990, when the restoration was completed. It was expended in 1994, in 2007 the House of the Surgeon discovered nearby back in 1989 became available for visits. The museum was named after Luigi Tonini, its founder, on the anniversary in 2015.

The museum possesses around 800 exhibits which are displayed in 36 halls. They are pretty varied but all of them are somehow related to Rimini. Some of the rooms serve as space for temporary exhibitions and cultural events. Every object is a result of hard work which includes randomly and purposefully organized archaeological excavations, donations, and purchases. The collection is divided chronologically and according to the theme:

The museum is located in the historical center of Rimini, on Via Luigi Tonini, 1. You can also find one of the city symbols not far from the venue – the Bridge of Tiberius, as well as the statues of Paul V and Julius Caesar, installed on the historical squares. The closest bus stop is called Piazza Ferrari, you can catch the bus №1.

Opening hours: the museum’s schedule depends on the season.

Admission: a full ticket will cost 7 euros, a reduced one – 5 euros (available for students between the ages of 18 and 25, senior citizens over 65 and group that include over 12 people.) Persons under 18 are free of charge.