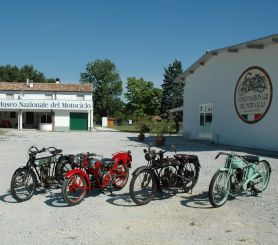 The National Motorcycle Museum (Museo Nazionale del Motociclo) in suburbia of Rimini is a great place to learn the historical background of two-wheelers. If anyone knows about them a lot, it’s Italians. This museum was created to help understand the history of motorcycle creation and evolution. That’s why in Italy it is considered to be unique compared to the other museums with the similar theme. Its collection includes many fascinating vintage exhibits.

History of the National Motorcycle Museum

The museum evolved out of the ideas that appeared in minds of three private collectors: Germano Corvatta, Giuseppe Savoretti, Tino Zaghini. Their collections were the ones that formed the museum core which was presented to the public in 1993. Throughout the next 25 years the collection was being expanded and currently, anyone can discover enough about the exciting world of motorcycles. Every year new exhibits and ideas appeared in the museum.

Today the permanent exhibition is housed in 4 halls that take up 700 square meters. The collection boasts around 260 motorcycles of 55 different manufacturers. All of them are separated into several groups: sports motorbikes, the first ones, motorcycles with sidecars, mopeds. Besides that, the tour through the exhibition is organized chronologically to better understand the history:

The exhibition starts with the famous first French motorcycle Werner and continues with well-known Italian models such as Frera SS 4V (1924) and Moto Guzzi 500 GTV (1937). Among the exhibits, there are both already manufactured and prototypes of world-known companies, for instance, Aermacchi, Benelli, BSA, Ducati, Frera, Harley Davidson, Henderson, Innocenti. Besides, the museum houses a library that consists of 10000 volumes where visitors can find detailed information about the evolution of this vehicle as well as numerous accessories, ancient photos, and posters.

The museum has a peculiar feature. Every year exhibitions are held in order to carry out barters of old cars and motorbikes between the collectors. The summer is considered to be a landmark season. During the hot months, various sports events and trade exhibitions are organized here.

The National Motorcycle Museum is located quite far from the city center, on Via Casalecchio, 58/N. Federico Fellini International Airport can be found nearby. The bus №20 makes a stop not far from the museum.

Admission: a full ticket will cost 7 euros, a reduced one – 5 euros (available for students between the ages of 18 and 25, senior citizens over 65 and groups that include over 10 people. Children under 12 and persons with disabilities are free of charge.

The information is relevant for June 2018.