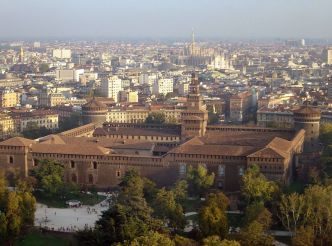 You will need more than one day to get around and get a good look at the Castello Sforzesco, located in Milan. This huge ancient building holds not only a long and troubled history, but also a lot of museums devoted to a wide variety of topics: from mysteries of ancient Egypt and the evolution of the inhabitants of this area to the decorative art of Italy and the collection of printed publications. Each visitor will find the exhibition to their taste and will definitely feel the beautiful and incredibly rich world of this country.

The history of Sforza Castle dates back to the 14th century. Lord of the western region of Milan – Galeazzo II Visconti – built a fortress here between 1360 and 1370. Then it consisted of two parts, separated by a so-called dead moat-walls, and was the residence of the Visconti family. After the proclamation of the Ambrosian Republic, the building was badly damaged and Francesco Sforza (in Italian Sforzesco) took up his restoration. With the support of military engineers, the fortress was modified and strengthened in accordance with the needs of the time. The work ended with the eldest son of Sforza, who moved to the palace with his wife. In the time of French rule, the castle was used as an ammunition depot and, as a result of the explosion, the tower of Filaret was destroyed. In the second half of the 16th century a whole garrison was located on the territory of the fortress. There were a hospital, a pharmacy, shops, a bakery, two churches here.

In 1706, the Austrian commander Eugene of Savoy conquered Milan on behalf of Emperor Joseph I of Habsburg. The only evidence of that time is the statue of St. John of Nepomuk, patron of the Austrian troops.

At the end of the 18th century, the fortress was in the power of the Napoleonic army. A restructuring was planned to ensure that the castle functioned as the best possible residence of the new government. However, after the withdrawal of Napoleon and the return of the Austrians, the building was again used for barracks. From 18 to 22 March 1848 the castle became a prison for the people of Milan arrested by the Austrians. When the Austrian troops were withdrawn, the fortress was plundered by the inhabitants of Milan.

Luca Beltrami was the head of the restoration of the castle, which began in 1892. Little by little the building was being reconstructed, towers and frescoes were being renewed. And as a result of numerous works, it became as we can see it today.

Sforza Castle is incredibly rich in museums and exhibitions for every taste and interest. Here you can find:

To reach the Sforza Castle in Milan, you can take:

The entrance fee for museums is 10 euros. One ticket allows you to visit all of the museums of the fortress. The castle itself can be visited free of charge.