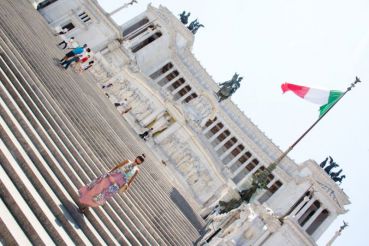 Rome celebrates its birthday every year on April 21, the day of its foundation. Celebration lasts for several days and is accompanied by many interesting performances.

Despite the fact that in the city there is no official day off on April 21, a spectacular festival is held. The Romans and guests of the Eternal City visit it with pleasure.

Circus Maximus, the largest race track of ancient Rome, will be the venue for major events on Friday, for Rome Day 2017.

During the exhibition, gladiators' fights will be held.

From 17:00 to 24:00 visitors can expect other interesting performances.

The celebrations will continue on the territory of Circus Maximus.

During the exhibition, gladiators' fights will be held.

From 12:30 to 14:00 – a meeting with engineers on the theme "Constructions in ancient Rome during the time of Emperor Trajan".

From 17:00 to 20:00 the guests of the holiday can enjoy live music and various performances.

On this day, the main events will take place not only on the territory of Circus Maximus, but also on Via dei Fori Imperiali.

From 10:00 to 11:00 – the opening ceremony of the Commissio Feriarum, the ritual of kindling the fire, will be held.

At 12:15 – laying a laurel wreath at the statue of Trajan at Via dei Fori Imperiali.

From 15:00 to 17:30 – performances within the historical reconstruction of Circus Maximus.

Through the ages to the birth of traditions

The legend says that the settlement on the site of present-day Rome was founded by Romulus and Remus, the sons of the Latin princess Rhea and the god of Mars. It happened in 753 BC.

In ancient times, Natale di Roma was celebrated as the main spring holiday. After, traditions disappeared. This event was revived only in the 19th century, after the Italian unification.

Every year on April 21, according to the tradition, Rome opens its gates for its inhabitants and guests. During the holiday many historical shows, costumed processions, gladiatorial fights, horse parade, fairs and much more are held.

Having visited Rome on its birthday, you can learn a lot of interesting things about its history and traditions, see a lot of spectacular performances, sample old Italian cuisine.

Historical Parade and the Goddess of Rome

Among all the activities the most popular is the Historic procession, which is headed by the Goddess of Rome. It is chosen at a special competition, which is held since 2004. Any girl from 18 to 30 years old living in Italy or other countries that were once part of the Roman Empire, can take part in it. It is important, the Goddess of Rome to have true Italian beauty and worthy spiritual qualities.

Reconstruction of historical events involves a lot of organizers from all over Europe. Thanks to this long and laborious process on the Day of Rome, people dress in red robes, armour of legionnaires, and in a moment the city is transferred to its origins. On these days you can visit souvenir shops and see evening fireworks.

If an event is like, tell your friends :)
Follow us on social networks
Facebook ()
Inhabited localities:
Rome
2017-04-21 - 2017-04-23
Venue:
Circus Maximus
Region:
Rome, Lazio, Italy
Votes: 1
5 1 5
0
You might also like
Start: 26 February 2017
End: 28 February 2017
Battle of the Oranges 2017, Ivrea
The Carnival in Ivrea (that is situated in the neighborhood of Turin) is famous for the Battle of Oranges. This is the most large-scale gastronomic event in Italy. In 2017, the Battle of the Oranges in Ivrea will start on Sunday, February 26th. The Carnival...
Start: 11 February 2017
End: 28 February 2017
Piazza San Marco
Venezia, Italia
Carnival of Venice 2017
On the February 11 Venice will be enveloped in a lively, cheerful and unrestrained frenzy of the most large-scale carnival in Italy. The Venice Carnival of 2017 will continue up to "Shrove Tuesday", which this year, according to the Gregorian calendar, will be on 28...
Start: 05 February 2017
End: 28 February 2017
Carnival of Viareggio 2017
Viareggio is a popular resort, located on the Tuscan coast of the Ligurian Sea. In summer, people come here because of the sea, and in winter, they come to visit the carnival. After the famous Venetian Carnival, the second largest carnival in Italy takes place...
Feedback