Battle of the Oranges 2017, Ivrea, Ivrea 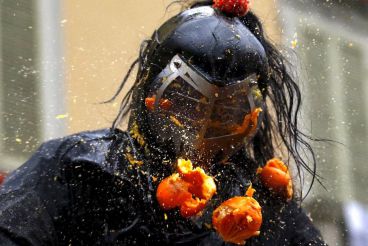 The Carnival in Ivrea (that is situated in the neighborhood of Turin) is famous for the Battle of Oranges. This is the most large-scale gastronomic event in Italy. In 2017, the Battle of the Oranges in Ivrea will start on Sunday, February 26th. The Carnival traditionally ends on the Shrove Tuesday, before Lent. This year it will be on 28 February. The three-day battle will bring together nine teams and tens thousands of spectators. During these three days, the players will destroy more than 500 tons of oranges! This battle symbolizes the freedom of the inhabitants of the town of Ivrea and the near arrival of spring.

The history of the battle of oranges is associated with the medieval urban legend. In that time, a local nobleman, owner of these lands, decided that he has a right to spend the first night with all the girls of Ivrea. But the miller's daughter, in order to protect herself, beheaded an evil ruler and victoriously put his head on public display. But the carnival battles also have more modern explanation. In the 20th century when girls of Ivrea wanted to attract gentlemen, they threw fruit in their direction, and they reciprocated. After World War II apples were used for this purpose, but later they were replaced by oranges. We may assume that the orange color is associated with freedom.

Place: Ivrea (Turin, Piedmont). The road from Turin will take no more than one hour, if you take taxi – half an hour.

Cost: you can observe the event for free, but a team player (foreigner) must pay about 100 euros.

It is a fun, lively, but also potentially traumatic event. This is why, you must be prepared for it, especially if it is your first time.

If an event is like, tell your friends :)
Follow us on social networks
Facebook ()
Inhabited localities:
Ivrea
2017-02-26 - 2017-02-28
13:00 - 19:00
Votes: 1
5 1 5
0
You might also like
Start: 11 February 2017
End: 28 February 2017
Piazza San Marco
Venezia, Italia
Carnival of Venice 2017
On the February 11 Venice will be enveloped in a lively, cheerful and unrestrained frenzy of the most large-scale carnival in Italy. The Venice Carnival of 2017 will continue up to "Shrove Tuesday", which this year, according to the Gregorian calendar, will be on 28...
Start: 05 February 2017
End: 28 February 2017
Carnival of Viareggio 2017
Viareggio is a popular resort, located on the Tuscan coast of the Ligurian Sea. In summer, people come here because of the sea, and in winter, they come to visit the carnival. After the famous Venetian Carnival, the second largest carnival in Italy takes place...
Start: 18 May 2014
End: 18 May 2014
Cavalcata Sarda in Sassari
In May 2014, held a spectacular cultural event - Cavalcade Sard.
Feedback