Those who love small quiet bays with turquoise waters and fantastic underwater life surrounded by cozy restaurants with fantastic views of a virgin nature should definitely come to San Fruttuoso.

A little abbey dated by the 10th century is located in a paradise bay which bears its name – San Fruttuoso. It’s located in Capodimonte, not far from Portofino. 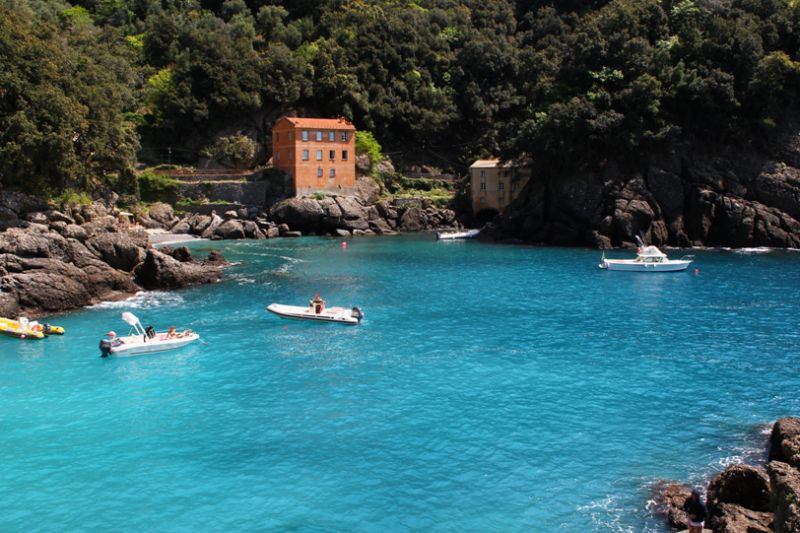 The History of San Fruttuoso Abbey

There are several legends telling the story of the Abbey’s appearance. According to one of them, the bishop of Tarragona was persecuted by pirates. Trying to save the relics of Fruttuoso martyr, the bishop came to the coast of Liguria Sea and found a church to keep them. One of the reasons he chose this place was a potable water source and the church was built over it. This is how Benedictine Abbey started.

Some of the buildings remained till present days are dated by the 10th century. Such as the Byzantine dome of the cathedral built over the water source which later became a part of the octagonal tower.

Some of the travel guide books and even locals will tell you a story about the Andrea Doria Tower. It bears the name of famous noble dynasty, which in the 13th century took an active part in the Abbeys improvement. Today in the monastery crypt, later rebuilt into the family mausoleum, one can see marble gravestones of 13-14th centuries. 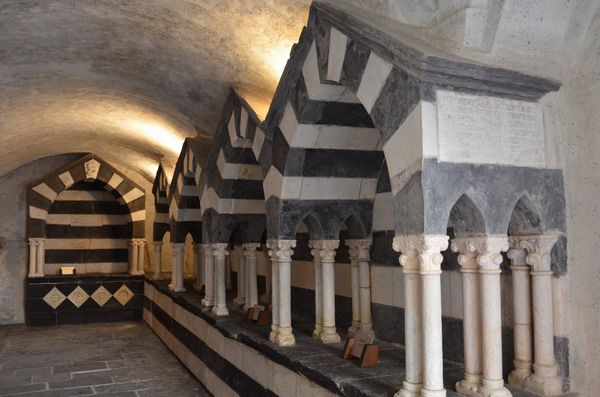 In the 16th century the tower was built to protect the area from the pirates got the name of Doria dynasty.

A special pride of San Fruttuoso is the beach. It’s interesting to know that it appeared only at the beginning of the 20th century as a result of flood. This was the time when the new age in the history of Abbey connected with its rebirth started.

What to See in San Fruttuoso

1. There is a museum in the abbey which occupies two floors. Here you can learn the history of this place. Roman sarcophaguses, the household items of the 13th century along with lots of historical documents are kept there. The entrance fee is 5 EUR. 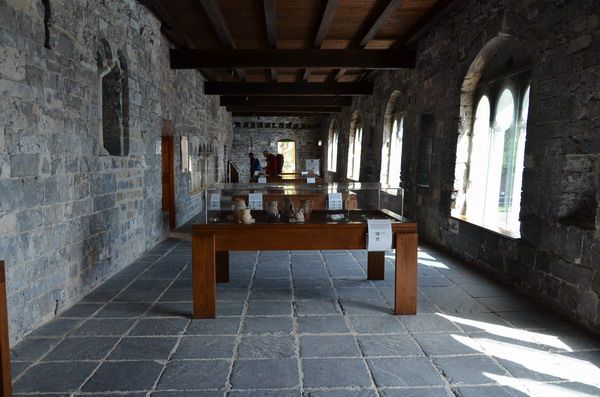 2. The Andrea Doria Tower. It was built in 1562 by the heirs of the famous Doria dynasty which played one of the key roles in the renaissance of the Abbey. Off from the road you can see the stairs leading to the tower. The two headed eagle is painted on the coat of arms of Doria family which hangs on the facade of the tower facing the sea.

3. The Beach of San Fruttuoso. Created in the 20th century by the forces of nature the stone beach is one of the main attractions in San Fruttuoso. Azure coast combines perfectly with small pebbles. On the beach you can rent a parasole and a sunbed for 15 EUR per a day. There is also a free zone for budget tourists where they can sunbathe on their personal beach towels. Of course this part of the beach is extremely overcrowded during the day-time. It’s easy to guess from the picture where the private and free zones are located. 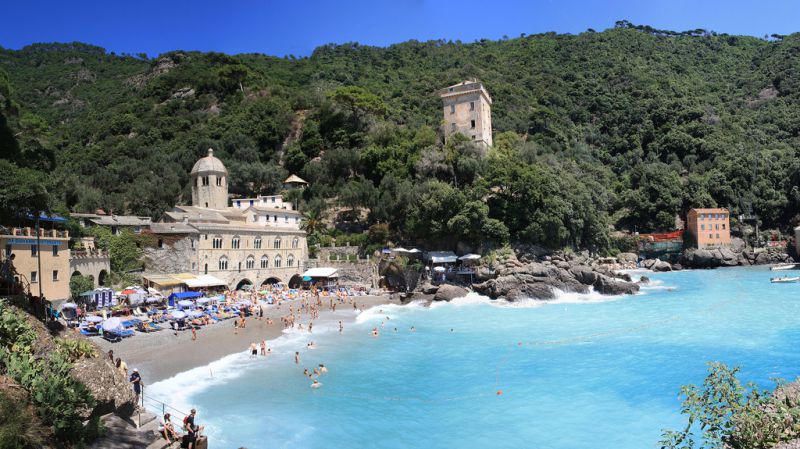 Photo by: flickr.com, by Francesco Pedemonte.

You can also change your clothes and take a shower at a special place on the beach for 2 EUR. But wise tourists advise to walk the coastline towards Portofino and in a few meters you’ll find a smaller beach with the same azure bay but much less crowded.

4. Restaurants. There are only three restaurants in the area. Two of them are located on the beach. So, while having your lunch, be ready to watch people sunbathing in front of you. But we suggest you to go up to the third one. You’ll see the stairs leading to it. The restaurant is situated quite high, so, due to its location the guests can enjoy fantastic views of the bay and Abbey from above. 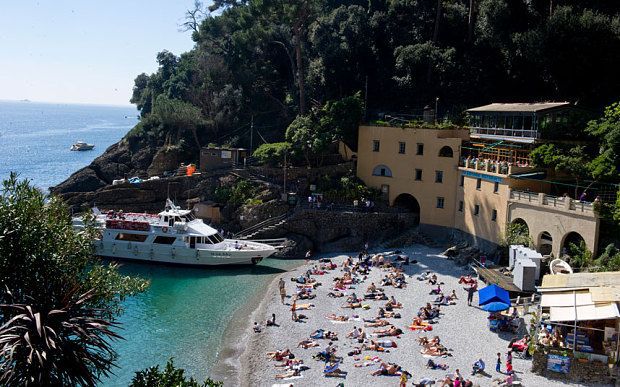 5. The Statue of Christ of the Abyss deep under the sea. You’ll see ads about the possibility to see the statue under water for 4 EUR in all the restaurants and other public places all around the town. Address the stuff and they’ll organize a small adventure for you. By a motor boat you’ll be brought to the place where in 1954 a statue was erected. It’s quite close to the shore. Be ready to spend some time waiting as the place is popular among divers. You won’t see the statue from the boat, as it’s located 17 meters deep. To see it you can take special equipment. Besides you can rent a full diving set and explore it thoroughly. 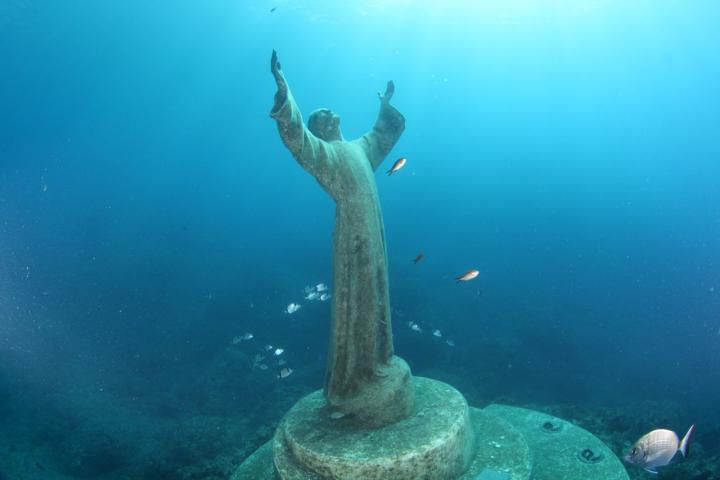 Where to Stay In San Fruttuoso

There are few options to stay by the Abbey and, as you might guess, the prices are really high and can be compared to the apartments in popular sea resorts. So, it’s easier to stay in Portofino and to take a ferry to get to the place in the morning and back in the evening. Book a room in Portofino here.

But there is nothing impossible and you can also stay in San Fruttuoso. Environmental Protection Foundation has recently opened its own hotel called “FAI House”, where a room for two nights will cost you 600 EUR min.

How to Get to San Fruttuoso

To get to San Fruttuoso is not easier then to find a place to stay. The best option is to go there by sea. In high season the ferry goes there regularly. You can start from Santa Margherita Ligure, Camogli and of course, Portofino. From time to time you can even get to some other towns on the coast. Watch the timetable of the ferry here.

For example, in September you can get to San Fruttuoso from Portofino for 12 EUR. Be careful while checking the route and the prices. As a rule, a return ticket is more expensive. You can buy a ticket at the day of travel, but it’s better to contact the ferry station the day before to learn the correct info. In bad weather conditions most of the routes are cancelled. Besides, there’re private boats which can bring you there, but of course, such a trip will cost you much more.

But there’s also a budget solution. As San Fruttuoso is a part of nature preserve park, there are a lot of touristic paths. So, you can get to San Fruttouso from Portofino on foot. This would be the shortest way and the references say it’ll take you around 2 hours. But, it’s better not to be in a hurry and spend an hour more to enjoy the beautiful sceneries along the Liguria Sea. You’ll definitely want to take some pictures of laurels, pines and other fantastic plants of this paradise corner.