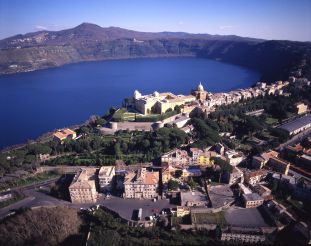 The Vatican Observatory in Albano-Laziale is one of the oldest astronomical institutes in the world. It is supervised by the Apostolic See and the Catholic church, which contrasts our standard notion of the relation between religion and science. The institution still conducts research and boasts fragments of meteorites as well as a rich library.

History of the Observatory

Pope Gregory XIII, who introduced the Gregorian calendar, stood at the dawn of astronomic research by the Catholic church. In 1578, the Tower of the Winds (Torre dei venti) was built in the Vatican for scientific purposes. In 1582, the pope established a committee for studies of scientific data that included Jesuit scientists. Research having been completed, the new calendar was promulgated. During the 18-19th centuries, there were three observatories: the Observatory of the Roman College, the Observatory of the Capitol and the Observatory in the Tower of the Winds. The institutions functioned with varying success, depending on the conservatism of pontiffs in office. On the 14th of May, 1891, Pope Leo XIII officially resumed the activity the Vatican Observatory at the palace near St Peter's Basilica. Scientists of various Catholic orders, including ubiquitous Jesuits, worked there.

Soon, the observatory could no longer explore the starry sky since Rome was becoming more dusty and illuminated. A summer residence of pontiffs in Castel Gandolfo near Rome became a new location of the observatory. Newly-equipped, it was reopened on the 29th of September, 1935. The population of the Eternal City as well as the level of illumination grew, which made research increasingly difficult.

In 1981, a branch of the observatory was established in Arizona, the USA, and the construction of a new research centre began. In 1993, a modern telescope was devised in Arizona. After scientific activity at Castel Gandolfo stopped, the premises were used as headquarters for official receptions, as a library and as a museum. On the 16th of September, 2009, the observatory moved to the territory of a convent in the Vatican gardens near the summer residence.

Nowadays, the observatory in Castel Gandolfo still functions as headquarters and hosts laboratories. Every 2 years international scientific conferences are held there, whereas summer schools on astronomy and astrophysics operate on a permanent basis. The library numbers about 22,000 books, most being devoted to astronomy. One can find real pearls there: works of Galileo Galilei, Nicolaus Copernicus, Isaac Newton, Johannes Kepler, Tycho Brahe and Angelo Secchi, who previously worked at the institution; as well as series of the 17th-century scientific publications "Comptes Rendus" and "The Philosophical Transactions of the Royal Society".

The collection of meteorites showcased there is one of the largest in the world. It has around 1,100 samples of more than 500 fallen celestial bodies. The weight of the specimens is about 150 kg in total. Physical and chemical properties of meteorites are tested in the laboratories. There are 4 telescopes previously used to observe the starry sky preserved in the old premises at the Pope's summer residence:

The Vatican Observatory is located 25 km from the centre of Rome near Lake Albano. The Papal Palace and the adjoining gardens, where the observatory is situated, can be visited only in the absence of the pontiff. Minor difficulties may occur since there are few members of staff, and the institution is regarded mainly as a scientific centre, and not as a tourist spot.

The central entrance to the observatory is located in Albano-Laziale, on Piazza Sabatini, 4B/5. The most convenient way to get there from Rome is by train that departs from the Roma Termini train station and runs through the stations of Albano Laziale or Castel Gandolfo, the latter being closer to the residence.