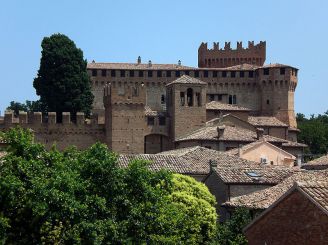 Gradara Castle in the eponymous town is known for the fact that, according to legend, a terrible tragedy described by Dante in his Divine Comedy happened here. The love story of Francesca and Paolo. The castle is one of the most visited monuments in the region of Marche and represents the scene of museum events, music and art. Costumed performances, fireworks and solemn feasts are held here.

Nowadays, Gradara remains a well-preserved medieval fortification. The walls are surrounded by battlement embrasures and towers, a high moat and a suspension bridge. The castle is protected by two walls, the most distant of which stretches almost 800 meters.

History of the Gradara Castle

In the Middle Ages, fierce battles for the land took place, and citadels were erected on the tops of the hills. Settlements were organized around them, and they were surrounded with castle unapproachable walls. Gradara Castle was like that. The first fortified 30-meter tower was built here in 1150. After the Malatesta family settled in Gradar, the fortress was built and surrounded by two rows of defensive walls. A drawbridge and kilometer underground tunnels were built.

When Gradara came into possetion of the Sforza family, the castle was transformed, and from a militant fortress it turned into a Renaissance palace. Sforza added an open gallery, murals appeared on the walls of the rooms, created by Giovanni Santi, Raphael's father. A significant part of the decoration of the fortress was executed in 1493 by order of Giovanni Sforza, for his beloved wife Lucrezia Borgia.

At the beginning of the 16th century, Gradara had a new owner – Francesco della Rovere. In 1631, the fortress was transferred to the possession of the papal legates.

The earthquake of 1916 caused very strong damage to the fortress. In 1920, engineer Umberto Zanvettori bought the castle and completely reconstructed it, but in 1928 sold it to the state. In 1983, the castle and all property (collections of guns, clothes, etc.) were transferred to the state and became part of the museum.

Now the castle is privately owned. The owner does not live there, but all the attractions of the mighty fortress are accessible to tourists. The courtyard, rooms of the former owners, ceremonial halls, Francesca’s bedroom with a secret passage are in the free access.

The furnishings, which correspond to the 13th century, were restored in all rooms of the castle. In the halls there are well-preserved paintings and decorations, household items. On the walls there is detailed information about what happened when and in what room.

This story took place in 1286. The Duke of Malatesta had two sons. The elder Giovanni was lame and middle-aged. To strengthen relations with another influential family of Rimini, they chose beautiful Francesca for Giovanni. But, since the bride could have been frightened by an ugly fiancé, they decided to deceive her and married her with the brother of Giovanni, the young handsome Paolo.

When the girl got married and the deception was revealed, she began secretly meeting with Paolo. This fact became known to her husband and he killed lovers right in the marital bedroom. A jealous spouse jumped on them with a knife. Francesca died first, shielding Paolo, then Giovanni stabbed his brother. This tragic love story was portrayed in the works by Dante, Giovanni Boccaccio, Petrarch, Rachmaninov and Tchaikovsky.

What to see in the castle

Gradara Castle is located at: Piazza V Novembre, 1, 61012 Gradara. Distance from some stations and stations to the castle:

Admission: 6 euros. Every first Sunday of the month admission is free. Information about the opening hours and cost may vary.