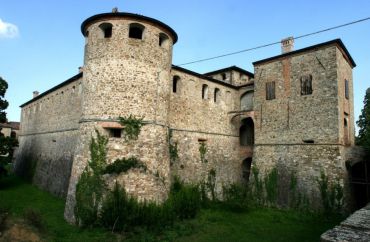 Castle of Agazzano (Castello di Agazzano) in the town with the same name in the Piacenza province is a beautiful and powerful structure, created in different epochs and combining several styles. It rises on a hill above a small river. The fact that the palace has always belonged to the same family is noteworthy, and it definitely adds to its attractiveness.

The first foundation stones were laid in around 1200 by a nobleman from Piacenza – Giovanni Scotti. This ancient family of Scottish origin looked after the territory near the town of Agazzano, which had a favorable trade position and fertile lands. In the following years, the family finally settled here, keeping its fortress and lands in constant skirmishes. In the 15th century the fortress was exposed to a fire, and in 1475 it was restored in its present appearance. This was facilitated by the union with another ancient family Gonzaga.

In 1741 the clan was again united through marriage from the family of Anguissola. And a palace was built on the site of the pre-existing ancient castle-villa, connected with the fortress. These two structures are only 10 meters apart, and they complement each other in a very peculiar way. From the end of the 18th century the castle became the summer residence of the family. The last member of the family died in 2008. And now the restored fortress is open to visitors.

Nowadays, excursions and various events, exhibitions, conferences, dinners, weddings are regularly conducted in the castle. The whole complex consists of two parts: a fortress and a villa, surrounded by gardens and having their own cellars.

In 1529, the Count Pier Maria Scotti was killed in a hotel in Agazzano. He was known as a real patriot of his lands, an inveterate adventurer and an experienced fencer. For this last, he got a nickname Buso (from the word Buco – hole). The body of a nobleman was thrown into a gutter, this is a fact. And it would be nothing, but only after it strange things began to happen. The next morning the bodies were not found. And later the doors began to open themselves arbitrarily, the candles were lit and could be blowned, broken glass was often found in the rooms. Already in the 20th century, several visits were made by expert associations in the field of ghosts, who discovered traces of otherworldly presence. And many believe that after death the Count remained in his ancestral nest.

The castle is located in Agazzano, on the banks of the River Torrente Luretta. It is 20 km to the south-west of the city of Piacenza, in the province of the same name. It is surrounded by numerous hills alternating with plains planted with vineyards. From Piacenza, you can get here by bus route E6. It leaves from the bus station in Piazzale Marconi, near the railway station. The journey time is about 40 minutes. If you are driving a car, leave Piacenza on the SP10 motorway, then turn to San Nicolò a Trebbia onto the SP7 road and follow the directions to Agazzano.

Admission: the price of a full ticket is 8.5 euros, with a discount - 7 euros. The discount is valid for schoolchildren and groups of more than 15 people. For children under 7 – admission is free. Data of June 2018.