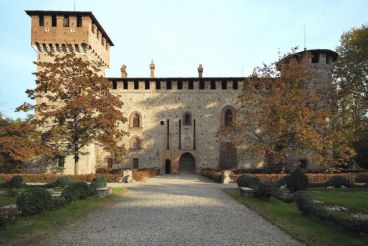 Castle of Grazzano Visconti (Castello di Grazzano Visconti) is probably the most beautiful in the province of Piacenza, and one of the best in the whole region. A small and luxurious medieval structure is inseparable from the villages around it and the amazing park. Now this complex is a tourist gem of the province, attracting visitors from all over the world.

On February 18, 1395, Gian Galeazzo Visconti, Duke of Milan, gave away the Grazzano area in the possession of his sister Beatrice, who was married to a nobleman of the noble family of Piacenza – Giovanni Anguissola. Then the construction of the future patrimonial nest began. In its square structure, the castle looked like another possession of the Visconti family, a fortress in the town of Pavia.

Over time, the building was modernized. In 1698, the wooden suspension bridge was replaced by a quadrelli structure. In the 19th century, the castle began to decline, along with the gradual extinction and depletion of the family. In 1870 Filippo Anguissola died, and in 1883 the castle became the property of a relative, the Duke of Guido Visconti di Modrone. At the very beginning of the 20th century, his son and heir, Duke Giuseppe Visconti, undertook the reconstruction of the estates. The architect Alfredo Campanini was invited. In place of the miserable hovels around the castle, appeared a village built in medieval style, as well as a magnificent park. In subsequent years, the settlement developed, and now it is a well-restored and structured landmark.

The castle has a quadrangular plan with towers at the corners, two of them round, and the other two are square at the base. It is built of stone and brick, and the alternating strips of these materials have a decorative shade. Terracotta profiles are used on the stone. The buildings form the three sides of the complex, the fourth side is the crenellated wall. The fortress is surrounded by a large moat, the entrance was possible through a suspension bridge. This scheme was classic for the medieval period. Inside the castle there is a square courtyard surrounded by arcades.

Nowadays, excursions are regularly conducted in the castle, as well as various private events and meetings are organized.

The village around the castle was originally built for a more decorative purpose, and with the aim of attracting tourists. All buildings are beautiful and harmonious, and various elements of the landscape of the village (fountains, balconies, windows, columns, emblems and inscriptions) are reasonably located. The oldest building near the castle is the Church of St. Anne, the family chapel of Visconti, dating from the 17th century. Near the castle was an Italian garden in eclectic style with an area of ​​15 hectares. It is richly decorated with many paths, fountains and statues. Today, there are about 50 species of trees, among which there are rare ones.

Every decent castle must have its own ghost. There is one here, and her name is Aloisa. This lady was the wife of a local police captain, who betrayed her. Unable to withstand the separation, the woman died of jealousy and pain. Since then her spirit has been wandering in these places. Once upon a time, a good ghost appeared to the Duke Giuseppe (the one who built the park and the village). He drew her portrait: a nice, full-grown woman of short stature. Many visitors bring flowers and gifts to comfort the unhappy in love.

The Castle of Grazzano Visconti is located in the village with same name, on Viale del Castello, 2, in the commune of Vigolzone. It is only 15 km south of Piacenza. From Piacenza you can reach the village on the buses E34, E35. They leave from the bus station in Piazzale Marconi, near the railway station. The journey takes about 25 minutes. If you are driving a car, then from Piacenza, take the motorways SP654 and SP654R, following the signs for Grazzano Visconti.