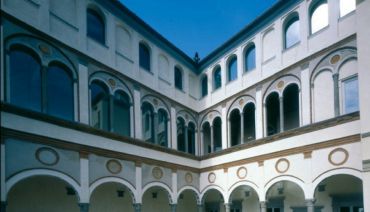 Adriano Bernareggi Museum is located on Via Pignolo in the lower part of the city of Bergamo. The collection of the museum is based on the collection of Bishop Adriano Bernareggi, reflecting the development of Catholic culture and art in the Bergamo province in the 16–19 centuries. In the museum there are paintings of many local artists. Here you will see the canvases of Lorenzo Lotto, Giovanni Battista Moroni, Giuseppe Maria Crespi, Vivarini; ornaments from precious metals; wooden multi-colored sculptures; embroidered products and tapestries.

The Adriano Bernareggi Museum in Bergamo was opened in September 2000 in the restored Renaissance Bassi-Rathgeb Palace, which was presented by the Rathgeb heirs to the diocese for the creation of a museum there. Most of the exhibits were collected by Bishop Adriano Bernareggi in the churches and monasteries of his diocese in the 30s of the 20th century.

In twenty rooms on three floors there are icons and ritual objects, fragments of church ornaments and portraits of priests. The exhibits are grouped not in chronological order, but in a thematic order: each room is devoted to a separate religious theme.

In the room of Saints there are pictures of different eras, but they all have one common feature: if the saint was killed, then we see also the weapon of his murder or the almost surreal image of the experience.

Great impression is produced by the so-called "creepy" pictures. These are, mostly, pictures of skeletons in clothes of different social classes, including kings and popes. They probably express the idea of ​​the equality of all people in the face of death.

Also interesting are the wooden statues of Madonna, executed in a very realistic manner.

The nearest stop to the Adriano Bernareggi Museum is called via S.Giovanni 1 Parco Suardi. Bus S runs here. The museum is located on Via Pignolo.

The price of admission ticket is 5 euros. Information of March 2018.