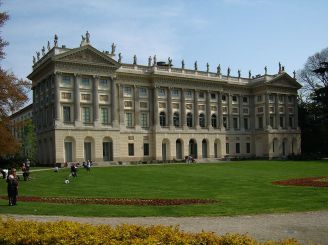 Villa Reale in Milan, also known as Villa Communale or the Royal Villa, is one of the main attractions of the city. This building in the style of Classicism, along with an exquisite park appeared in the late 18th century. Today, the building of the villa is the Gallery of Modern Art with a collection of Lombard art of the 19th century. A romantic park with alleys and bridges, situated nearby is also noteworthy.

The architect of the Royal Villa in Milan was the architect Leopoldo Pollack. It was commissioned by Count Ludovico Barbiano di Belgiojoso, who at that time served as Austrian ambassador in England.

After the death of Count Belgiojoso, his mansion became the property of the Repubblica Cisalpina. The emperor Napoleon Bonaparte with his wife Josephine lived here. At that time the villa got its modern name – Reale or Bonaparte.

In the 20s of the last century, Villa Reale in Milan became the property of the city and the Gallery of Modern Art was housed in its walls. After the war, in the 1950s, a pavilion of modern art was built in the villa. In 1993, a terrorist act was committed near it, as a result of which 5 people were killed and the building itself was damaged. Three years later it was restored.

Near the villa there is a luxurious English park, by the way, one of the first in Italy. Leopoldo Pollack handled its creation, along with Ettore Silva. The main idea of ​​the park is unity with nature, so that human intervention is invisible. What you can see in the park:

The garden of Reale was closed to ordinary visitors. During the reign of Duce (Benito Mussolini), the doors of the park opened to all comers.

Collection of the Gallery of Modern Art

The Gallery of Modern Art occupies the first and second floors of Villa Communale. Mostly, the art museum presents works of art from the 18th century to the 20th century. Here you can get acquainted with the works of such outstanding artists as Paul Gauguin, Amedeo Modigliani, Pablo Picasso, Vincent van Gogh and others.

Sculptures, vases, busts dedicated mainly to mythology, as well as a collection of portraits are exhibited here. Here you will see the works of Pompeo Marchesi, Abbondio Sangiorgio, Innocenzo Fraccaroli and others. A staircase along which you will see the marble busts of Andrea Appiani and Antonio Canova leads to the second floor.

In general, a collection of works of art of the 19th century are presented in 30 rooms. These are mainly Italian authors.

Nine rooms on the second floor present a collection of Grassi with paintings from the 14th to 20th century, as well as an interesting collection of Oriental art. The most interesting are the works of Cézanne, Manet, Gauguin and Van Gogh.

The 10, 11 and 12 rooms are dedicated to the Vismara collection with paintings and sculptures by Italian artists of the 1900s, such as Modigliani, Sironi and Morandi. There are also works by foreign authors: Matisse, Vuillard, Renoir, Rouault, Picasso, Dufy.

You can get to the Villa Reale in Milan on the metro (Palestro and Turati stations), by buses № 61 and 94 (get off at the Via Senato stop) or by trams №1 and 2 to the Piazza Cavour stop.

Admission: entrance ticket costs 5 euros, with a discount – 3 euros. Free entry on the first Sunday, and also on the first and third Tuesday of the month from 14:00. Free admission for children under 18. The cost and opening hours can vary.