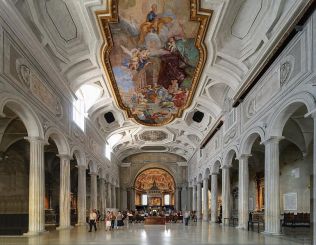 On the square of the same name, in big beautiful Rome, there is a basilica called San Pietro in Vincoli (Basilica di San Pietro in Vincoli). This ancient building draws attention from religious people, historians as well as art and architecture fans. Here you can find one of the famous sacred relics which makes people want to make the pilgrimage to this place. The church is shrouded in legends and tales, its history boasts many prominent names of world-known Italians. The construction also has tombs of cultural and political figures inside.

San Pietro in Vincoli was built in the first half of the 5th century. There were, however, impactful events that occurred earlier – once an Eastern Roman Empress Aelia Eudocia received holy relics from Patriarch of Jerusalem as gifts during her stay in Palestine. Those were chains that bound Saint Peter when he was imprisoned. The Empress sent them to her daughter Licinia Eudoxia that was married to a Western Roman Emperor. The legend has it that when Licinia Eudoxia gave the relic to Pope Leo I, he brought it to the chains from the Mamertine Prison to compare them, two of them connected and became one. This event is considered to be of a great significance since the chains from East and West represented two empires.

In 442 Licinia Eudoxia decided to create a church where the holy treasures could be preserved. The basilica was consecrated in 438 by Sixtus III. The building underwent many restorations later.

Church’s name is related with the Latin word “ad vincula” which means “chains.”

The legendary chains of Saint Peter are kept inside San Pietro in Vincoli under the main altar.

There is a fascinating sculpture of Moses created by Michelangelo in 1513 In the basilica. The statue is remarkable for the peculiar horns – Moses has beams of light coming out of his head. You can also notice the line on his knee. As the legend says that Michelangelo once believed that his artwork was alive and hit him on the knee while shouting “Why do you not talk?”. Originally the statue of Moses’ was supposed to be a part of a great architectural and sculptural complex, Pope Julius’ II tomb, but this idea was abandoned which was a real disappointment for the outstanding sculptor.

Visitors can also enjoy artworks made by the painters such as Guercino and Domenichino.

There is the Cavour subway station near San Pietro in Vincoli. You can also take buses 75 and N2 to the Cavour/annibaldi stop.