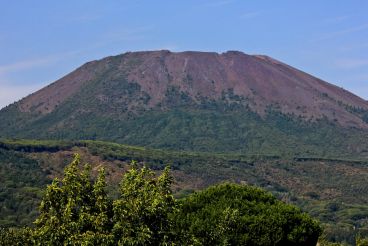 Active volcano Mount Vesuvius located on the coast of the Tyrrhenian Sea in the Bay of Naples, 9 km from Naples. Vesuvius volcano in Italy - it is a huge cone-shaped mountain height of 1280 m, which is crowned by a caldera of about 750 m in diameter. The activity of the volcano is characterized by flashes of eruptions. One of them was described by Pliny the Younger as an incredible disaster, which destroyed the Roman cities of Pompeii, Herculaneum, Stabiae and Oplontis, located on its slopes. The eruption in 1631 claimed the lives of 4 thousand people, and the volcanic ash fell on Constantinople, which is more than a thousand kilometers away of volcano. In 1805, because of the powerful eruption Naples was destroyed and died more than 20 thousand citizens.

A recent powerful eruption happened in 1944. Emissions were up to an altitude of 9 km and a fountain of lava erupted at the height of 900 m. Today Mount Vesuvius is one of the most dangerous volcanoes in the world, as more than three million people are living near it.

The most famous and tragic eruption was in 79 AD, when several cities were wiped out, including Pompeii, whose inhabitants were buried under layers of ash and hot stones.

Centuries later, conducting excavations, scientists have found many fossilized remains of dead residents. At the site of the old Roman garden was found a group of people trying to escape the deadly lava and turned into stone statues. Together with the ashes of the city flooded a hot downpour. Pyroclastic flows covered the bodies of the dead, remembering the culmination of the tragedy in the form of stone sculptures.Today, this place preserved and called Garden captives, where you can see 13 of petrified statues terrible tragedy victims.

How to climb the volcano Vesuvius

Volcano Vesuvius in Italy is probably the main natural and cultural attraction in the country. It is very popular and attracts the attention not only of scientists, watching his activity, but also tourists.

Cableway was created in 1880 for the tourists who want to climb the slopes of Mount Vesuvius. It was destroyed during the eruption of 1944. In 1995, Mount Vesuvius and the surrounding area have been converted into the National Park.

Today, many tourists are willing to climb the slopes of Vesuvius and capture the panorama of a sleeping volcano. Get an unforgettable experience and visit Vesuvius is easy. Up to a height of 1000 meters can be reached by car, there is organized parking for buses and cars. Here you can buy a ticket cost 7 euro and walk up a further 170 m. The rise is not too tedious – along the road located benches for rest.