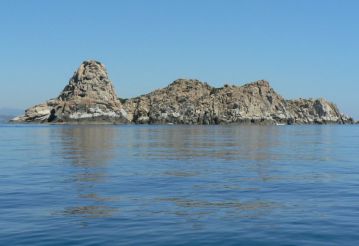 The Serpentara Island is a small uninhabited island, which is located directly opposite the beach of Villasimius in Sardinia. The island is part of the marine reserve of Capo Carbonara. The name of Serpentara most likely received from the Italian word "serpentara", which means "snake", thanks to the bizarre shape of the rocks on the island.

Serpentara is located in 4 km south-east of Sardinia. The area of the island reaches 134 hectares, and its height is 54 m above sea level. Here is the tower of St. Louis - it was actively used for aiming at enemy ships, then the island was part of Spain. Today, it offers a beautiful view of the coast of Villasimius.

Particular attention should be paid to the nature of the island of Serpentara - white sandy beaches, blue seawater, granite rocks of the island. The island's flora is rich in unusual plants, there are a wild cabbage and a flycatcher. The fauna of the island is not only a variety of marine inhabitants that live along the coast of the island, but also a large number of birds. The main fauna representatives:

To get to the island a tourist can on a small boat that can be rented on the beach, or with an excursion. Boats depart from the port on the beach of Villasimius. During the tour the tourist will visit the northern part of the island of Varaloni-Serpentara, then admire the unique forms of granite rocks that have turned into real works of art due to the active work of wind and sea. Then the boat will proceed to the southern part of the island - Punta la Guardia, where, in the era of pirates was a sentry who guarded the coast of Sardinia. Also in the program included visits to Cala Pir and Cape of the Juniperus.

It is worth noting: since the island of Serpentara is part of the reserve, navigation, fishing, and diving are performed only under the supervision of a certain agency, and in some cases completely prohibited.