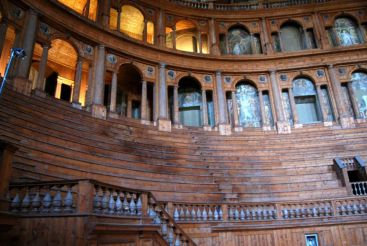 Farnese Theatre in Parma is the oldest surviving theater in the city. It is rich and impressive, even luxurious. After all, this miracle was created for representations of the ducal court, and the room had to correspond to its high status. Connoisseurs of high art consider the Farnese Theatre to be one of the most beautiful in all of Italy. It is surprising that the theater room is made of wood. Performances are sometimes held in it in the summer.

History of the theater

The construction of the theater began in 1618 by order of the Duke of Parma Ranuccio I Farnese. The goal was to celebrate the stay of the Duke of Tuscany, Cosimo II de' Medici in the city. The works were carried out according to the project of the architect Giovanni Battista Aleotti, and were completed in September of the same 1618. But because of the illness of Cosimo II, the opening of the institution was postponed by 10 years. It took place on December 21, 1628 on the occasion of the marriage of representatives of the two beforementioned families, Odoardo Farnese and Margarita Medici. Due to the high cost of the productions and the complexity of theatrical devices, only 8 performances were given, the last in 1732. After it, the theater began to wither. And on May 13, 1944, it was bombed and destroyed.

In the period 1956-1960 restoration works were carried out according to the original plans, and the theater acquired its original beautiful appearance. In 1990, the first performance was given after restoration. Soon, the theater began to function properly thanks to the help of charitable foundations.

The theater is located inside the beautiful Palazzo della Pilotta and nowadays it is part of the National Gallery of Parma. It was created inside the former premises for tournament fights, it impresses with its size:

The theater has a U-shaped plan with 14 levels to accommodate the audience. The maximum possible number of visitors reaches an incredible number of 3000 people.

The size of the scene is also not small:

Natural wood was used for the construction – spruce from the Friuli region. It was artificially plastered in order to imitate marble. Plaster statues made by famous Italian artists of the 17th century were the final decoration. One of the first sliding prosceniums was the highlight of the theater at that time.

The Farnese Theater is located in the Palazzo della Pilotta, in the historical center of Parma, on Piazzale della Pilotta, 15. The Bodoni Museum and the National Archaeological Museum are in the same palace, and the Lombardi Museum is next door. The nearest bus station is Pilotta (routes 6, 7, 8, 9, 11, 12, 21, 23).

Admission: the price of a full ticket is 10 euros, with a discount (young people 18–25 ) – 5 euros, for groups of more than 10 people – 8 euros. The ticket includes a visit to the National Gallery and the National Archaeological Museum. Every first Sunday of the month visits are without fee. Information about the cost and time of visit may vary.