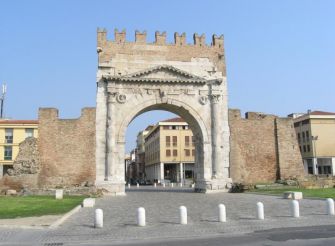 The Arch of Augustus (Arco di Augusto) is the most famous landmark of the ancient resort town called Rimini. At the same time, it is the oldest triumphal arch of Italy that is still around today. Just like the Bridge of Tiberius, it is a city symbol and can be found on the city hall’s coat of arms.

The monumental creation that dates back to the Roman Empire was dedicated to the empire’s founder himself – Octavian Augustus. The arch was placed at the exit from the city in 27 BC to then become a part of the road that connected Rimini and Rome. Construction marked the end of prolonged civil wars and the onset of peace. During the Middle Ages, the arch played the role of the city gates (Golden Gate) and was part of the city walls. An earthquake destroyed some decorations. To fortify the construction prongs were installed on the top in the 10th century. The fortress walls and houses near the arch were also demolished before the World War II, in 1936. And already in the second half of the 20th century, it was restored and now it is a true highlight of Rimini.

The arch is simply huge, like all buildings if this kind. The central vault is 8.84 meters high and 4.1 meters deep. Corinthian columns which are 10.4 meters high are placed on each side. Above the vault, there is a triangular pediment. Ornaments, bas-reliefs, and engravings on the arch have certain political references. Besides other things, medallions with images of the Roman gods can be found on the façade, these include Jupiter, Neptune, Apollo, and Minerva.

Destroyed walls are all that is left from the original polygonal towers that used to stand at the arch. Right now the construction is not connected to anything. The top of the landmark is crowned with medieval battlements. Before almost everything got destroyed a marble quadriga controlled by the emperor Octavian Augustus himself was placed on top.