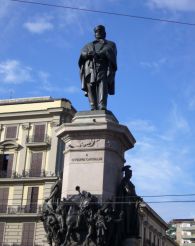 Almost in the center of Piazza Garibaldi in Naples there is an impressive Statue of Garibaldi – the great general, politician and nationalist. He played a huge role in the history of Italy, along with Giuseppe Mazzini, Camillo Cavour and Victor Emmanuel II in the so-called national movement Risorgimento, which contributed to the final unification of Italy. That's why Giuseppe Garibaldi was considered to be one of the Italian "fathers of the fatherland".

The bronze statue of Garibaldi is set on a high stone pedestal, richly decorated with bronze figures of his compatriots.

Garibaldi is depicted with a characteristic hat on his head, a hat he wore during his campaign of 1860 – the Second Italian War of Independence. Then he was a leader of about a thousand volunteers, who were called "Mille" or "Thousand", or also widely known as "Red Shirts."

The head of Garibaldi is turned towards the center of the Square of Naples.

The statue of Garibaldi is located almost in the center of Piazza Garibaldi. You can get there by trams, minibuses and even the metro station, stop "Garibaldi".