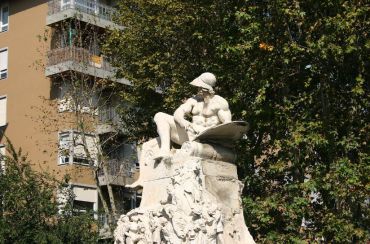 Installed in the very centre of the city, the monument to Felice Cavallotti in Milan differs greatly from other standard monuments dedicated to historical personalities. Its elaborated form implies that the life of the person which it honours was also uncommon. You will certainly stop for a moment to take a look at it, even if you are just heading one of the nearby landmarks.

History of the monument and personality

The author of the monument, Ernesto Bazzaro, was a celebrated sculptor at the time. Untrammelled in regard to the implementation of his ideas, Bazzaro belonged to the scapigliato movement. The monument to Cavallotti, created between 1901 and 1906, was influenced by the sculptor's preferences. Originally, it was installed in Piazza Pio XI. But the monument was considered insulting by the priests of the nearby Pinacoteca. As a result, it changed its location first in 1933, and then again in 1943. During the Second World War, the spear in the hands of the statue was damaged and has not been restored since then.

Felice Cavallotti's life (1842-1898) can be described in one word: invincible. A poet, journalist, scientist, politician, he is considered one of the best sons of Milan. In 1860, he joined Giuseppe Garibaldi, and until the end of his life was among the far-left politicians. Cavallotti did not recognise compromises, which is obvious from 33 duels he held, the last one of which became fatal for him.

The sculptural composition of the monument consists of two parts. The figure of the Spartan king Leonid, and not Cavallotti, is situated at the top.  In this way, the sculptor compared the two great  patriots. There was the following reason for that: in 1880, Cavallotti dedicated a poem, "La marcia di Leonida", to the Greek king. Leonid appears naked on the pedestal, although wearing a helmet and holding a shield with a spear. Striking the ground with the latter, Leonid is calling soldiers for a battle. Unfortunately, the spear has been almost completely destroyed.

The lower part of the pedestal has a whole mixture of different figures, which can be divided into 3 groups. It depicts scenes from Cavallotti's life: his speech to the masses, the politician among people during the cholera epidemic in Naples, and the statesman's funeral in a weeping crowd. The monument is made of white marble.

It is located near the centre of Milan in the Porta Venezia district, in Via Marina, 2. Giardini Park, Villa Reale, and Civic Museum of Natural History are situated nearby. The easiest way to get there is by the buses № 61, 94 (Via Senato stop). You can also get there by tram (route 1), stop P.za Cavour, and by metro (line 1), Palestro station. From these stops you will need to walk for about 5 minutes.