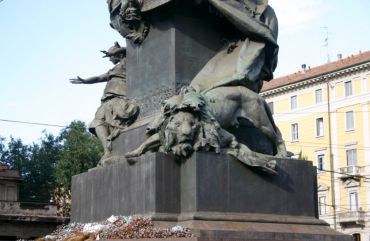 The Monument to the Five Days (Monumento alle Cinque Giornate) is located in the historical centre of Milan. The sculpture rises above a spacious square. You won't see people having fun and laughing near it since the events that preceded the installation of the monument occupy one of the central places in Italian history. This is a silent reminder of the price for freedom the nation had to pay.

History of the monument, and the event

The creation of the monument began in 1881. As a result of the competition, the sculptor Giuseppe Grandi was commissioned the construction. He worked on the monument until his death in 1894 and did not live to see the construction finished. The grand opening took place on the 18th of March, 1895, the day of the 47th anniversary of the events that marked the beginning of the Austro-Sardinian War. The latter resulted in the period of Risorgimento, during which Italy was unified.

From the 18th to 22nd of March, there was a series of strikes and unrest that turned into a revolution. This led to an armed conflict on the 21-22 of March between Austrian troops and the rebels near Porta Tosa, later named Porta Vittoria. In the upshot, the city was liberated from Austrian troops. The monument was later erected at the place where the conflict occurred.

The obelisk is made of Swedish granite and has a height of 22 metres. On the four of its faces, the names of the killed are engraved. There are several sculptures at the base of the monument. Five of them are semi-nude figures of women symbolizing the 5 days of the insurrection. The other two are a sculpture of a lion awakening from sleep, a symbol of the Italian people, and a sculpture of a soaring eagle, a symbol of the oppressive Austrian empire.

By the way, the figures of women were reproduced from famous models of that time, whereas animal sculptures copied real lions. Under the foundation of the monument, there is a vault with the remains of dead revolutionaries.

The monument is located in the square with the same name at the intersection of four central streets of Milan. West of Corso di Porta Vittoria, all the major sights of Milan are located. Not far from the square there are Children's Museum and the Capuchin Museum. You can get there by: trams (routes 12, 27) or buses (routes 60, 73, K511, N6, N27). You need to get off at the Piazza Cinque Giornate stop.