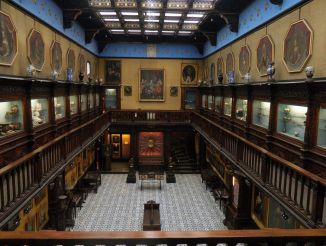 The Gaetano Filangieri Civic Museum in Naplesis an eclectic collection of works of art, coins and books collected in the 19th century by Gaetano Filangieri, Prince of Satriano. Neapolitan historian and collector gave his treasures to the city. The collection is in the Palace of the 15th century –Palazzo Cuomo on the Duomostreet.

History of the Filangieri Civic Museum

The Cuomo Palace was built in the Renaissancestyle, with a facade made of stone, from 1464 to 1490 by a wealthy merchant Angelo Cuomo. The architect was Giuliano da Maiano.

In 1587 the palace was annexed to the neighboring church San Severo al Pendino. In 1881 and 1882, during the urban reconstruction of Naples, the entire building was dismantled and moved 20 meters away, in order to expand the street.

In 1888, the museum was opened in the palace by Gaetano FilangieriJunior. In September 1943, a significant part of the collection was destroyed by the retreating German troops. The FilangieriMuseum was reopened in 1948 thanks to the assistance of many philanthropists.

In recent decades, the museum has often suffered from regular closures. Many exhibits are temporarily exhibited in the Castel Nuovo.

The collection of the Gaetano FilangeiriMuseum has over 3000 objects, among them: a diverse range of medieval weapons, arts, crafts and furniture, a library of 30 volumes dating from the 13th and 14th centuries. Including paintings of Neapolitan masters: José de Ribera, Bernardino Luini, Francesco Solimena, LorenzoVaccaro.

The Gaetano Filangieri Museum is located in the Palazzo Cuomo on Via Duomo 288, north of the crossing of Corso Umberto, near the church San Severo Al Pendino. Not far from the ring there is a stop Umberto I Colletta, where buses № 202, 460, and also N1, N3, N8 and R2.