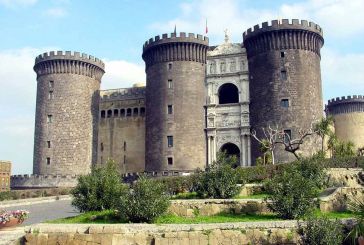 The majestic castle located on the shores of the Gulf of Naples is called Castel Nuovo or New Castle from Italian; it was built in the 13th century for Charles I of Anjou. The castle was new at the time, considering already existing fortifications. And that’s where it acquired its name. This impressive fortress has five cylindrical towers and triumphal arch erected by Alfonso V in-between two of them. Castel Nuovo had been serving as a fortification for many centuries, but today it is considered to be one of the prime examples of medieval architecture in Naples.

The construction of Castel Nuovo was started in 1279 and lasted for three years. Charles I of Anjou himself never got a chance to live there. His policies and high taxes caused an uprising, which led to many tragic events. When the king died, his son Charles II of Naples became the owner of the castle.

It was the beginning of the 14th century when Castel Nuovo started improving: it was reinforced and expended, slowly becoming center of the political, social and religious life of the whole region. In 1456, the town was almost destroyed by an earthquake. However, it didn’t affect the castle. Nevertheless, time and different events still bruised it. At the beginning of the 20th century, major renovation work of Castel Nuovo was performed.

Sights to see at Castel Nuovo

You can get to Castel Nuovo by public transport. Take bus №140, R1 or R2 to Piazza Municipio-maschio Angioino stop, №140, №151 or №154 to Acton-molo Beverello stop, tram №1 or №4 to Colombo-porto stop. You can also get there on foot from the railway station of Naples – it will take about 25 minutes.