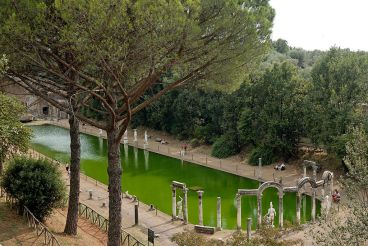 Hadrian's Villa in Tivoli (Villa Adriana) has practically lost its original magnificent appearance. Despite that, it is still considered to be one of the most important and interesting architectural monuments from ancient Roman times. This place is so significant that UNESCO listed it as a World Heritage Site. Constructed in the 2nd century Hadrian's Villa was meant to be a residence for the emperor. At the time it took up over 120 hectares, however currently the area open to public totals around 40 hectares.

The villa consisted of 30 sites which were named after the places the emperor once found spectacular. Unfortunately, it is yet undiscovered how exactly were these sites called back then, so the modern names are based on scientists’ assumptions.

Roman emperor Hadrian who very much liked privacy and silence decided to build a country residence. The construction began in 118 on the land which belonged to leader’s wife. It is unknown who the architect was, but there is a theory that Hadrian himself was in charge of the project. One can only wonder whether that is true. However, we know for a fact that the emperor loved the place so much he abandoned his palace on the Palatine Hill and ran the country from there.

After Hadrian’s death, the villa served as a summer residence and then later on it was deserted. In the 6th century the whole area was looted by barbarians, in middle ages it was being destroyed by the locals who dismantled the ancient constructions for building materials.

The examination of ruins started in the 16th century. Cardinal Ippolito II ordered to transfer found marble statues to the Villa d'Este which he owned.

Archaeological studies hadn’t been conducted here until the 19th century. Currently, it is an archaeological site which is open to the public and is still being excavated.

Sights to see at Hadrian's Villa

Emperor Hadrian designed his villa to be the place for rest, relaxation, and philosophical explorations. As a result, it had not only well-paved paths but thought-out underground passages. They were meant to keep the emperor away from noise and bustle which were caused by servants, during his reflections.

Even though the villa’s architecture represented the Roman style, the influence of Greek and Egyptian culture could still be traced. It consists of a theater, a library, palaces, artificial ponds, place for servants, slaves and military people, thermaes, etc.

Main sites on at Hadrian's Villa:

You can reach Hadrian's Villa from Rome by car or by taking one of the numerous tours. If you want to save some money, catch the bus №4 at Tivoli’s central square, and it will take you to the villa.

You can get to Tivoli from Rome by:

Villa’s archaeological site is open daily (except for January 1 and December 25) from 9:00. Closing time depends on the season:

Ticket offices close about half an hour before the villa does.

Admission: 8 Euro. You can, however, visit the place for free on the first Sunday of each month. The information is relevant for January 2018.