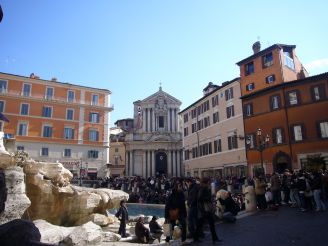 Saints Vincent and Anastasius at Trevi Church (La chiesa dei Santi Vincenzo e Anastasio a Trevi) is very close to the famous Trevi fountain. The name suggests that you can immediately visit both sights. The church attracts attention with a lot of sculptural elements. You will want to look at them for hours. But this place is known not for the splendor of the exterior decoration.

The church begins its history from the Middle Ages. In those days, it was known as the Saint Anastasius at Trevi Church, and retained that name until the 14th century. Until 1876, it was also called the Papal Parish. This was due to the fact that the pope's residence was situated in the same area in which the church was located. In addition, the organs of the thoracic cavity of the pontiffs, which were removed during embalming and were stored in special niches. The beginning of this eerie tradition was started by Sixtus V in 1590. It lasted until the arrival of Pope Pius X.

By order of Cardinal Giulio Mazzarino, the church was completely rebuilt. The building, which you can admire today, is made in the Baroque style and was erected between 1644 and 1650. The construction was carried out by the architect Martino Longhi the Younger