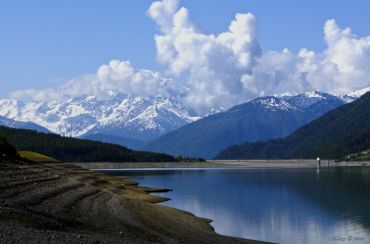 Lake Reschensee (Lago di Resia) is rightfully considered to be the largest freshwater reservoir of South Tyrol. It was created artificially, but based on natural lakes, and fueled by alpine streams. With an area of ​​660 hectares, the Reschensee is located at an altitude of 1498 m above sea level. The lake is not only a place for unhurried strolls with the opportunity to admire the beautiful scenery, but also a playground for various sports. Also, the reservoir is home to many species of fish.

History of the lake

The history of Lake Reschensee began in 1950 during the construction of a large dam in the place where there were three natural lakes: Resia, Curon and San Valentino alla Muta. The hydroelectric power ponds were united. Then settlements were flooded, and under the water there were 163 houses. Later the settlements were rebuilt upstream.

The only evidence of the city that once existed on the site of the lake is the bell tower, peacking out directly of the water. The church with the bell tower was built in the middle of the 14th century and it was flooded with the city. People try to maintain it in a decent state and during the reconstruction the water level in the lake was lowered. In winter, when the water turns into ice, you can reach the bell tower on a frozen surface. The legend says that on snowy winter days you can hear the bells ringing.

Things to do on Lake Reschensee

The lake is open for outdoor activities lovers. In winter you can go skiing or skating. In warmer times, you can enjoy walking, cycling or rowing. This place is very popular among kitesurfers and sailors. But swimming or fishing in the lake is not recommended.

Not far from the lake there is the Graun/Curon stop, which can be reached by bus № 273 from the town of Malles Venosta (also called Mals). The road takes about half an hour.