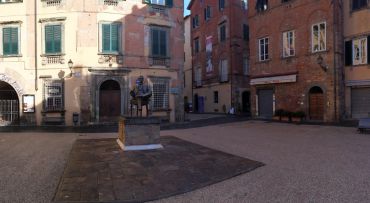 Puccini Museum in Lucca is the first and last abode of the great Italian composer Giacomo Puccini. Now you can see things owned by the Puccini dynasty, which for many years were under the supervision of the city authorities.

The Puccini Museum is a real parental home where the author of immortal compositions spent many years. In the complex you can now find:

This part of the complex immerses you in the life of the dynasty of composers, the last of which was Giacomo Puccini. In this place he wrote the famous opera Turandot and other well-known compositions. You can move freely in this part of the museum, observing the personal belongings of the owners. In addition to clothes, paintings and furniture, in the Puccini's Birth Home you can see original librettos and musical scores, a grand piano on which the maestro wrote his works.

In a small shop you can find books of classic writers, postcards, musical notation albums, as well as purchase tickets for visiting the museum.

History of the Puccini House and the Museum

In 1815, a Puccini couple moved to an ordinary house on Corte San Lorenzo. Life in this place did not differ from other areas of Lucca until the birth of Giacomo Puccini here in 1858. The day after birth, the baby was baptized in that very house.

In the same place, Giacomo Puccini spent years while growing up. However, at the age of 31, in 1889, the composer and his brother Michele had to sell the land. For themselves, they left the possibility of redemption.

Giacomo experienced a lot of pain because of the separation from the place where he was born and grew up. In his messages, he admitted that he was very upset because he could not keep the parental home. The composer also wrote about the future of the Puccini Museum: “I love those cracked walls, slanting beams, all the ruins of my house. I will return it as soon as possible. ” He succeeded in setting foot on the threshold of this house in 1893. Since then, the composer lived in Milan, then returned to his native walls. December 1924 was the last month when Puccini felt calm for his parents' house and could quietly say goodbye to the world.

After the composer's death, the building fell into the hands of his son Antonio. After some time, the house passed to Antonio’s wife, Rita Dell'Anna, who in 1973 donated her property on Di Poggio Street to the city.

In 2011, the Puccini's Birth Home was opened, an it is hard to pass by it, even if it is not included in the route plan. After all, it is impossible not to notice the bronze statue of Giacomo Puccini and the memorial plaque, which reports that the Italian composer was born in this place, spent a happy childhood and died on December 29, 1924.

You can get to the Puccini Museum in Lucca by bus lines Lazzi/Vaibus. It is impossible to drive directly to the abode of the great composer. Therefore, you will have to walk along Via Kalderia down and turn right at the second intersection, or climb Via Pozotorelli and turn left at the second turn.

The Piccolo Hotel Puccini and the four-story building of the CR DI Pistoia E Della Lucchesia S.P.A will be your guiding points. After that you will see the Madame Butterfly coffee shop and the monument to Giacomo Puccini.