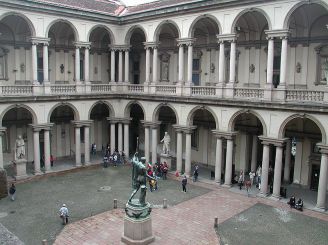 Brera Art Gallery (Pinacoteca di Brera) in Milan is an art gallery that is one of the largest and most famous galleries in the city. For over 200 years it has been a place of pilgrimage for art lovers. The museum features one of the most famous collections of Venetian and Lombardian pictorial schools. It exhibits masterpieces of Italian masters of the 14th and 19th centuries: Raphael, Caravaggio, Donato Bramante, Tintoretto, Mantegna and others. And also the work of European artists: El Greco, Rembrandt, Goya, Van Dyck. Brera Art Gallery is open in the palace with the same name, whose history dates back to the first half of the 13th century.

History of the Pinacoteca Building

The palace of Brera is located in the ancient monastery of the Order of Humiliati that was suppressed in 1571 by Pope Pius V. In the 12th century, the church of Santa Maria di Brera was part of the monastery. In the 16th century, the building and property were taken over by the Jesuits. They created a school, a library and an astronomical observatory here. Later, there was a need to expand and rebuild the monastery.

The current palace was built by the project of Francesco Maria Ricini, the construction began in about 1615. The epidemic of the plague in 1630 slowed down the process of erecting the palace. Construction work lasted until 1773, when the Order of the Jesuits was suppressed by Clement XIV, and the building passed to the rulers of northern Italy of that time – the Austrian dynasty of the Habsburgs. The construction of the palace in neoclassical style was completed by the famous architect Giuseppe Piermarini in 1776. In the same year the Academy of Fine Arts was founded by the decree of the Empress Maria Theresa.

In the Brera palace, besides the picture gallery, there are also:

The Academy's collection began with small graphic drawings and copies of sculptures. This collection served as a visual aid for students. Everything radically changed after Napoleon's company in Italy in 1796 and the assertion of the French rule. Many monasteries and churches were suppressed by the new power, and confiscated masterpieces of art became a source of replenishment of various galleries, including the Brera Art Gallery in Milan. During the reign of Napoleon, the gallery received the status of a public art museum.

The main sections of the Brera gallery:

Nowadays, the Brera Art Gallery owns unique painting masterpieces. Creations of recognized masters, and of the less famous ones are in each of the halls. Typically, most visitors are looking for the work of famous artists, among them: Titian, Correggio, Van Dyck, Rubens, Raphael. Here are some of the most famous paintings:

Pinacoteca di Brera in Milan is located in the central part of the city on via Brera 28. You can get there by:

The museum permits photography (without flash). Video shooting and selfies are not allowed. In the exhibition halls there are comfortable chairs where you can relax and comfortably enjoy the masterpieces of the gallery. On the territory of the museum there are souvenir shops and a café.

The cost and opening hours can vary.