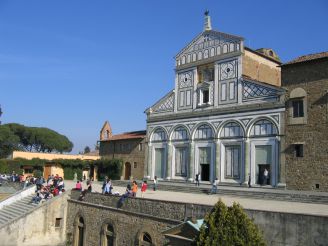 History of the basilica

The temple is dedicated to the first saint of Florence. According to legend, Miniato (or Minas) was a wealthy and wasteful secular man. But later, around 250, he became a Christian, and his friend, Emperor Decius, had poorly accepted this fact. After being tortured, Miniato died a martyr's death in a cave where he used to live as a hermit.

In the 4th century a chapel was built on the mountain, where Miniato departed to another world. And in 1018, at the insistence of Bishop Ildebrando, construction of the church began, which was continued by Henry II, Holy Roman Emperor. After that, a convent of a Benedictine order appeared near the church, and in 1373 it was transformed into a male monastery. At that time, the Olivetan Congregation began to dwell here.

Most of the elements of the exterior and interior appeared in the basilica in the 13-14 centuries. In 1530, the unfinished bell tower was used to adjust artillery fire during military actions. In 1535 its construction was brought to an end. In the period 1908-1929, a large-scale restoration of the entire temple complex was carried out.

Architecture of the basilica

The façade of the church is considered to be an excellent example of Florentine architecture.

The monastery next to the church is documented from the very beginning of its existence. Later, in the 14th century, it was decorated with frescoes and mosaics by the famous master Paolo Uccello. At the beginning of the 14th century, the Archbishop's Palace was built near it, which was used by the Bishops of Florence as a summer residence. In 1337 it was united with the main buildings of the monastery and part of its premises served as a hospital.

The whole monastery complex was surrounded by walls that were modified into a real fortress in 1553.

Outside the walls of the abbey there is a small cemetery, closed in 1854. Many famous personalities are buried here, including the writers Carlo Collodi, Giovanni Papini, the statesman Giovanni Spadolini and the actor Tommaso Salvini.

The San Miniato al Monte is located to the south of the historic center of Florence, on the right bank of the Arno River, on Via delle Porte Sante, 34. There are several interesting museums not far from it: