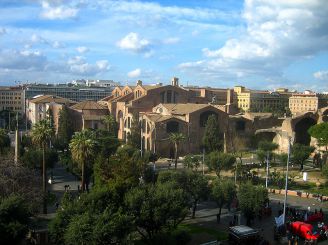 The ruins of ancient Roman baths – the Baths of Diocletian – were created in the 298-305 AD. In modern Rome, these ancient baths are the part of the National Roman Museum. In addition to the baths, the museum includes three more objects, located separately: the Palazzo Massimo, the Crypta Balbi and the Palazzo Altemps.

History of the Baths of Diocletian

The Roman emperor Gaius Diocletian wanted to build the largest thermal baths that were unsurpassed in the world. That is why the baths, the total area of ​​which, together with the gardens, occupied about 13 hectares were created.

Since 537, after the king of the Ostrogoths – Vitiges – destructed the aqueduct, the baths no longer functioned as intended.

In 1563, on behalf of Emperor Pius IV, Michelangelo conducted a major reconstruction of the Baths of Diocletian. So the Caldarium bath was turned into a church dedicated to the Theotokos, angels and martyrs. The building of the monastery of the Cartesians was created. Thanks to such zealous reconstruction, these ancient Roman baths have survived to our days in much better condition than others.

An interesting fact about baths

The Baths of Diocletian could simultaneously accommodate up to 3 thousand people. Grand gardens were decorated with fountains and pavilions. There were halls for meetings and sports exercises and there was also a library situated on the territory.

Museum in the Baths of Diocletian

Since 1889 there is a collection of Roman and Greek art of the National Roman Museum situated in the baths. In general, there is something to see and to admire.

In the museum you will see not only the masterpieces of Michelangelo, embodied in life in the church and monastery, but also ancient statues, sarcophagi, reliefs, altars, tombs and much more.

The Baths of Diocletian in Rome are located near the Piazza della Repubblica. Opposite of the main railway station of Rome Termini.

Opening hours: the Museum can be visited from Tuesday to Sunday, from 9:00 to 19:30. The ticket costs 7 euros. For people from 18 to 25 – 3.5 euros. On the first Sunday of every month admission is free for visitors under 18. The cost of the ticket includes a visit to the rest of the National Museum of Rome. The ticket is valid for 3 days.