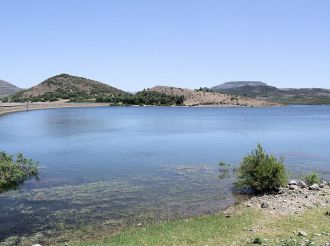 Monte Pranu Lake is an artificial lake that was built between 1948 and 1951. The lake located in the municipality of Tratalias, in the province of Carbonia-Iglesias, and it is the largest reservoir in the province for collecting water. The lake is replenished with the waters of the Manna River.

What to see on the lake

Monte Pranu Lake is a popular tourist attraction in Sardinia. The surrounding landscape of the mountains deserves special attention. The fauna of the lake is different, there are many kinds of fish: carp, perch, pike, catfish, so Monte Pranu is a favorite place for fishermen.

At the foot of the mountain grows a pine forest – the best place for picnics, biking and hiking.

On the Monte Pranu Lake, are held rowing competitions. It is generally believed that the lake is the best place for outdoor relax.

History of the Monte Pranu

An artificial lake for water storage was built in the middle of the XX century. The main purpose of its creation was to meet the needs of agriculture, livestock, and later the industry in the water. For the construction, were invited the most famous engineers of Italy.

However, the construction of the dam also caused a number of negative consequences. In the area of  Monte Pranu Lake, the level of groundwater significantly exceeded the norm. During these years, water damaged the foundations of nearby houses, many of which have become unsuitable for life.

Monte Pranu Lake is located on the southern outskirts of the island of Sardinia. The nearest town is Tratalias. Nearby is Cagliari Airport, which accepts many flights from European cities. From the airport the tourist can to get by car, or by regular buses to Tratalias.