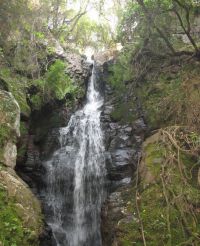 Cascata sul rio Bia Josso is one of the most beautiful springs located in the Santu Lussurgiu district, among the rocks of Montiferru in the western part of Sardinia. Another natural landmark of Sardinia, the Sos Molinos waterfall, sits not far from it. The waterfall was formed by the Bia Josso river. The flow stutters beautifully down into a small lake which feeds the surrounding vegetation.

Bia Josso waterfall can be reached from Cagliari, the largest port of Sardinia. Follow the SS131 road and turn to the SP11 road when you are in the city of Paulilatino. Drive up to Bonarcado: the road from the city will lead you directly to the waterfall. A  trail takes tourists to Cascata sul rio Bia Josso.