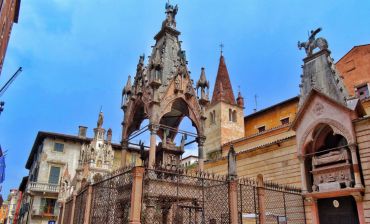 Scaliger Tombs in Verona are the masterpiece of Gothic art. This is a complex of tombstones located in the courtyard of the Church Santa Maria Antica, near the Piazza della Signoria. For more than seven hundred years the remains of the Verona rulers of 13-14 centuries from the Scaliger family (also known as della Scala) are preserved here. One of the most prominent members of the family, Cangrande I della Scala, was the main patron of Dante Alighieri, and Dante devoted his “Paradise” to him. The monument is called "Tombs", since it is a complex of high-raised sarcophagi with gravestones in the form of richly decorated arches, similar to small temples. Three arches – Cangrande I, Mastino I and Cansignorio – crown magnificent equestrian statues.

Architecture of the Scaliger Tombs

Scaliger Tombs were built by different masters in the 14th century, and in the 18th and 19th centuries they were restored. The territory of the cemetery is surrounded by a fence with a wrought-iron grille, on which there are visible images of the staircase, the symbol of the family of della Scala ("Scala" in Italian – a staircase).

The first arch on the side of the Piazza della Signoria is the tomb of Mastino I, built in Romanesque style. Nearby there is another isolated burial site of Alberto I. Near the church wall there are three simple tombs of Bartolomeo I, Cangrande II and Bartolomeo II.

The most ancient is the tomb of Cangrande I, located above the side door of the church. The sarcophagus is supported by stone dogs ("Cangrande" in Italian means "big dog"), in the clutches of which there are shields with the coat of arms of della Scala. The tomb is decorated with military ornaments and symbols of various Italian cities. On the sarcophagus there is a statue of Cangrande I with a smiling face. And on top of the arch there is another statue of the ruler, in knight armor and on horseback.

The tomb of Mastino II is richly decorated. At an altitude of more than four meters there is a sarcophagus surrounded by figures of saints. A luxurious canopy with three arches stretches to the sky above the sarcophagus, on top of which stands a majestic equestrian statue of the deceased, armed with a spear and shield. But, this is a copy. The original stone riders of Mastino II and Cangrande I are in the Castelvecchio museum in Verona for safety.

The most impressive is the tomb of Cansignorio. This magnificent hexagonal tomb of colored marble, looks more like a mausoleum, and was built in 1937 by sculptors Gaspar Broaspini and Bonino da Campione. The statue of Cansignorio is on the sarcophagus with bas-reliefs depicting the life of Christ. The tomb is surrounded by chapels with figures of holy warriors inside and twisted columns supporting the dome-canopy decorated with bas-reliefs. The equestrian statue of the ruler with a sword completes all this splendor.

The Scaliger Tombs in Verona can be reached by buses 70, 71, 96 and 97. The closest stops are: Piazza delle Erbe or Via Arche Scaligere.

Opening hours: you can admire the Scaliger Tombs from the street through the grill absolutely for free and at any time. And you can see all the details from up-close – during the work of the church of Santa Maria Antica, from 7:30 to 12:30 and from 15:30 to 19:00 every day, except on Mondays and holidays. You need to pay for entrance.