Statue of the Nile, Naples 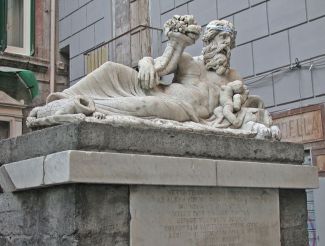 Walking along the Spaccanapoli street, in the old town, you can see one of the most famous statues in Naples, the city symbol: the statue of the god Nile. For a long time the statue was beheaded and considered to be female. It was rebuilt in 1657, and a bearded head was added. The statue of the Nile in Naples is an ancient Roman marble sculpture of 2-3 centuries.

Story of the Statue of the Nile

The statue depicts the god of the Nile, lying on the sphinx. There is an opinion that it was installed in the Roman port city by Alexandrian traders.

The sculpture has a rich history. After the sculpture was discovered in the 12th century, disputes about its restoration were repeatedly raised. It was partially restored, then destroyed again. Only in the 18th century its true meaning was revealed and significant steps were taken to reconstruct (author Angelo Viva). It is assumed that the statue was made in honor of the Egyptian god Nile.

Interesting fact: during the Second World War, a part of the statue – the head of the Sphinx, was stolen and found after 60 years in Austria.

The statue of the Nile is located almost at the crossroads of Nilo and San Biagio de Librai streets in Naples.