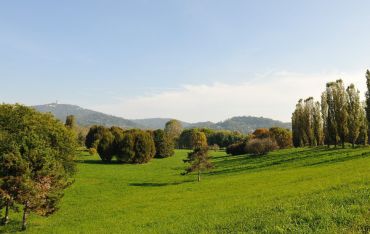 The Colletta Park is one of the many green spaces in Turin. It is small and cozy but it turns into a busy place on weekends. Athletes, outdoor enthusiasts, as well as families that like picnics visit this park. Together with Parco dell'Arrivore, it is part of the recreational river zone of the Meisino Natural Park in the north of Turin.

History of the park

The favorite activity of the kings had always been hunting. They loved to hunt not far from the capital, and often created special lands. This is how “Regio Parco” originally created as the royal hunting grounds in the 17th century appeared. However, in 1706 it was destroyed during the siege of Turin by French troops. The park was the place where the artillery that shelled the city was located. Having survived the siege, the rulers of Savoy restored the park. In the 18th century, a tobacco factory was built on the opposite bank of the river which operated until 1996.

After two world wars, the park fell into disrepair. However, at the end of the last century, the city authorities decided to restore it again, and thus a simple infrastructure for active recreation was created. The park is named after Pietro Colletta, the Italian general, politician and historian of the 18th and 19th centuries.

Here an interesting fact: the ancient road Via Francigena passes through the park. This route was used by pilgrims and knights who traveled from England and France to the ports of Puglia from where they could get to the Holy Land. Special signs pointing to its location are set along bike lanes. While walking in the park, if you look to the east, you can find the hill Superga with the Basilica on its top. Snow-covered peaks of the Alps can be seen in the North in fine weather.

The Colletta Park is located in the north of Turin, between the districts of Barriera di Milano and Vanchiglietta. The main entrance faces Via Giulio Carcano. You can get here by bus № 19 which stops at Fermata Carcano. Tram № 15 and buses № 68, 77, 3006, 3107, E68 travel to Fermata Brianza which is behind Ponte Washington.