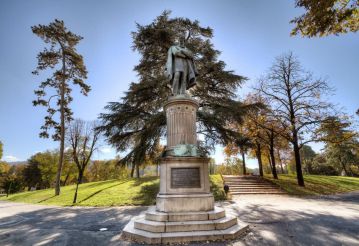 Monument of Massimo d'Azeglio in Turin was established in honor of one of the most prominent figures of the Risorgimento era. Italy remembers and honors its heroes, and the monument, accordingly, is executed beautifully, gracefully and it correctly illustrates the life of a statesman.

Massimo d'Azeglio was one of the sons of a wealthy nobleman. From childhood he was taught everything a man should know. The young man was trained in military affairs, became a lieutenant and joined the service. But soon left it, devoting himself to art. This attracted him most of all, and during his life he created many good works. Together with this, Massimo was engaged in writing. But in turbulent revolutionary times, he, being a colonel, distinguished himself in the battles of the first war for the liberation of Italy. In 1848, he, like after him – his cousin Cesare Balbo, became the President of the Piedmont congregation. During 3 years in office and 10 years of further political activity, he had made great efforts to unite the scattered kingdoms on the peninsula. In the last years of his life, the politician departed from this kind of activity, devoting himself to writing memoirs. He died in 1866.

Already in 1867, having collected money for the creation of the monument, the committee approved the project of the sculptor Alfonso Balzico. Works lasted for 6 years, and the opening of the monument took place on November 9, 1873. It was installed in the Sambuy Gardens on Piazza Carlo Felice, and in 1936 it was moved to the present place.

Having a total height of 9 meters, the monument is made of red granite and bronze. A statue of a statesman was placed on it. He is depicted in full length, with arms crossed on his chest, and in a coat. The pedestal is decorated with 4 bronze tiles with symbolic bas-reliefs, indicating the activity of this versatile person:

On the sides of the monument there are bas-reliefs of important moments of Massimo's life: his wound in the battle of Vicenza and the signing of the proclamation of Moncalieri.

The monument is located in the northern part of the Parco del Valentino on the banks of the Po River, at the intersection of Corso Vittorio Emanuele II and Corso Massimo d'Azeglio. Nearby there are Ponte Umberto I and Museum of the Botanical Garden. You can get there by trams (№ 7, 9, 16CD, 16CS), and buses № 24, 33, 52, 93. Stop Massimo d'Azeglio.