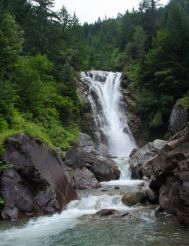 Not far from Schilpario there is a small, but very picturesque Waterfall del Vo. The road to it starts from the restaurant Chalet del Vo. While walking for half an hour along a country path in the shade of trees, you can enjoy the beauty of the waterfall. The waterfall of the River Vo (Torrente Vo) near Schilpario is a great place for romantic walks and family picnics. You can sit on the grass at the foot of the waterfall or use specially equipped picnic areas.

Those wishing to take a walk can choose one of the routes that pass through the valley of the river Vo. Among them there are circular routes. And in the west of Schilpario there is a cozy camping.

In winter, the waterfall del Vo, like the whole of this region, becomes one of the most interesting places for mountain skiing and mountaineering.

Valley of the River Vo and Schilpario

The valley of the river Vo is sandwiched between the mountains of the Bergamo Alps, and on its bottom there is a violent stream. Due to its isolation, the nature in the valley has remained almost intact. That is why this is an excellent place for outdoor recreation and sports tourism at any time of the year. Spruce, pine, alder and walnut prevail among trees in this area.

You can get to the valley through the place Schilpario. In the past, the main occupation of local residents was the extraction of iron ore. In memory of those times a museum was organized in the old mine. Here you can walk on the underground trails, accompanied by a guide.

Now Schilpario is one of the centers of ski tourism.

You can get to Schilpario from Bergamo by car in about an hour and a half. Or by bus with transfers. The best option is to take bus C at the bus stop in Bergamo, drive to Costa Volpino and, after taking the S70c bus, get to Schilpario. The road takes about two and a half hours. From Schilpario to the Waterfall del Vo is about 4 km. It is better to use the services of a guide.