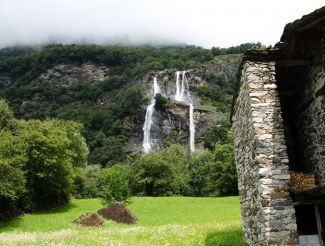 The Acquafraggia Waterfall in Borgonuovo is one of the most beautiful in Lombardy. It originates from glaciers in the Alps near the border with Switzerland. Originating at an altitude of more than 3 thousand meters, this mountain stream descends to the Mera River and flows into it just above the Chiavenna. Along the way, the waters of Acquafraggia Waterfall flow through two hanging valleys and form the lake of the same name at an altitude of 2,043 meters. The stream of Acquafraggia is impetuous and turbulent, with numerous cascades. For this waterfall and got its name, because Aqua Fracta is translated from Latin as "broken water".

What to do when visiting the Acquafraggia Waterfall

It is best to start your visit to Acquafraggia with the park of waterfalls "Acqua Fraggia" near Borgonuovo. Here you can admire the flow from up-close, relax under the canopy of trees in the heat or have a picnic. The park is a favorite place for children. In three minutes walk there is a convenient parking and a café.

Acquafraggia is also suitable for those who like active recreation. On the West side from the park there is an equipped camping. And near the waterfall there are several picturesque trekking routes of different length and complexity. Climbing stony paths and overcoming many steps in the shade of trees, you will reach the ancient villages of Dasile and Savogno.

How to get to the waterfall

If you travel by car, then you can get to Acquafraggia from Milan by new tunnels in less than 2 hours.

The park of waterfalls can be reached from Chiavenna in less than an hour. You can get to Chiavenna on: