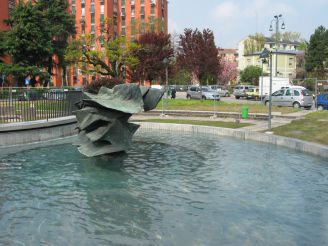 Fontana di Piazza Gasparri in Milan is rather inconspicuous compared to other fountains in the centre of the city. Nevertheless, it visibly enlivens the area. The fountain was built in 1960. Almost half a century later, in May 2010, the restoration was finished. At the base of the fountain surrounded by a green lawn there is a round pool of about 600 square meters. In the centre of the reservoir, a bronze sculpture stands. Opposite it, a bridge of white stone slabs spans a river. Right behind the bridge, there is a number of jets shooting water upwards. The church of San Bernardo alla Comasina sits in front of the fountain. The square, in which the fountain stands, was named after the Cardinal and Secretary of State Pietro Gasparri.

The fountain is located in the north of Milan, in the Comasina district, about 6 km from the city centre. If you drive a bit further north you will find 3 peaceful and quiet huge parks. You can get there by the buses that run along the routes 41, 52, getting off at the stop of Q.Re Comasina. Nearby there is a metro station, Comasina, line 3. Fontana di piazza Gasparri is about 5 minutes’ walk from there.