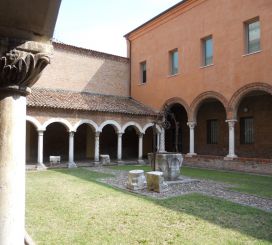 Cathedral Museum (Museo della Cattedrale) in Ferrara is a collection of many ancient things from the iconic Cathedral of Saint George the Martyr. Masterpieces of art that has been stored in the temple for centuries are exhibited here. Most of the exhibits date back to 14-19 centuries.

The ideological inspirer of the foundation of the museum was Giuseppe Agnelli, director of the library Ariostea. In 1906 he created the organization Ferrarie Decus, designed to protect and preserve the local historical and artistic heritage, especially items that came from the cathedral. The museum was opened on October 27, 1929 thanks to the assistance of Archbishop Ruggero Bovelli and the Mayor of Renzo Ravenna. The masterpieces from the church Chiesa Madre Estense were immediately transferred here. The museum director made an agreement with the municipality, according to which in 1930-1932 the collection was replenished with valuable samples from the Lapidary Museum.

For a long time, the institution was situated in the rooms above the atrium of the cathedral. But at the end of the 20th century the question arose about a new exhibition space, more suitable for a modern museum. The choice fell on the church San Romano, which is adjoined the main temple. Restoration work was carried out there, and in 2000, on the anniversary of the birth of Christ, the museum occupied a new premises.

Collections of the museum consist of works of church and municipal property, beginning with the early Middle Ages and until the 19th century. It is divided into 3 halls. The first stores various manuscripts, lapidary specimens of the 8th century from the ancient city of Voghenza, as well as a miniature reconstruction of the bell tower of the cathedral. Valuable relics of the 14th and 15th centuries, clothing of the cardinals and bishops, as well as the painting Madonna col Bambino are exhibited in the second hall. The third hall is, in a way, a cherry on the cake – an gem of the entire collection. The most valuable samples of the museum are exhibited here:

The museum is located in the historic center, in the heart of Ferrara, on Via S. Romano, 1. The famous cathedral rises nearby, and other attractions of the city are nearby: the National Museum of Italian Judaism and the Castle of Saint Michele. In 2 minutes walk from the museum there is a bus stop Corso Porta Reno (routes 3, 4, 11, 390).