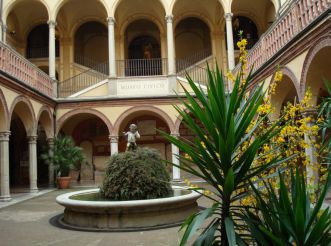 The Medieval Museum (Museo Civico Medievale) belongs to the system of the city museum of ancient arts. It lets its visitors to dive deep into the history of the ancient city, to find out what the lifestyle was like in Bologna during the Middle Ages. The museum has a lot of exhibits – mostly decorative and artistic art – that date back to those times. He put his collection on display in the ancient Palazzo Ghisilardi Fava.

History of the museum and palace

The palace is a prime example of the Bologna Renaissance architecture. It was built by order of nobleman Bartolomeo Ghisilardi during 1484–1491. The building was erected on the foundation of the previous buildings, during the construction works remains of ancient Roman buildings were found. In 1546 the palace was bought by the Fava family. the 13th-century Conoscenti Tower that was built into the palazzo is also quite remarkable. It is one of the twenty noble Bologna towers that still can be found today. In 1915 it was restored, and since 1923 the office of the National Fascist Party has been housed here. In the fall of 1929, the café in the palace was the exact place where Enzo Ferrari and his partners made a decision to create Scuderia Ferrari.

Museum pieces date back to the 18th century, that’s when rich noblemen began to collect various items. In 1881, the private collections were purchased by the civic museums of ancient art. This resulted in a series of reorganizations and the museum being moved to different places many times. It was finally divided into several parts. One of them, namely the collection of pieces from the Middle Ages, was exhibited in 1985 in a medieval palace.

The museum’s core collection consists of numerous artifacts that date back from the early Middle Ages (7th–9th centuries). The museum has a fine collection of 14th-century tombs, as well as bronze sculptures. A statue of Pope Boniface VIII of the 13th century that is made of gilded copper plates is quite striking. The decorative art collection includes objects made of ivory, glass, and ceramics which were used both in everyday life and as decorations. There is also a diverse collection of weapons and armor collected by Luigi Marsili in the 17th–18th centuries. In 1995, an exhibition of ancient manuscripts was presented to the public, which serves as an excellent example of the Bolognese miniature art of the 13th–16th centuries. The exhibition ends with jewelry and musical instruments collections.

The museum is located in the heart of the historic center of Bologna, on Via Manzoni, 4. It is surrounded by many beautiful old houses and palaces, a few blocks away there is the Archaeological Museum. The closest bus stops are Indipendenza (buses 11, 27, A) and San Pietro (buses 20, 28, C).

Admission: a full ticket costs 5 euros, reduced one – 3 euro which can be purchased by the persons aged 18–25 years, over 65 and groups that include over 10 people. Students and people under 18 are free of charge. Entry is free on the first Sunday of the month. The information about admission and opening hours may be changed.