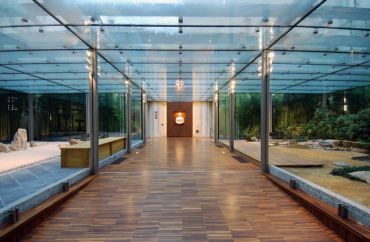 Museum of Oriental Art in Turin (Museo d'Arte Orientale) is quite young. But despite its young age, it is one of the most important and largest spaces devoted to the study of the culture of Asian countries. Its collections contain a large number of old exhibits from different countries. They are united by a single connecting thread, which is the birth and development of Buddhism.

History of the palace and museum

The museum is located in a palace of considerable age. It was built in the distant 1587 by the efforts of a diplomat from the noble family Solaro della Chiusa. In 1723, one of the heirs carried out the reconstruction of the building. In 1830, the palace was sold to the Minister of the Sardinian government, Count Clemente Solaro della Margarita. Already in 1870 his son sold the estate to the wealthy industrialist Paolo Mazzonis, the palace still bears the name of the entrepreneur. In 1910, the mansion was documented as a monument of art. Before the bankruptcy of the enterprise in 1960, the building housed its headquarters.

In 1980, the palace was sold to the city, and then the restoration began, which lasted until 1985. Judicial offices and security service structures have been located here for 19 years. In 2004 the Department of Culture of Turin started a grandiose reconstruction of the building. In 2008, museum with delightful design opened its doors to visitors. And in 2015, the halls of mansion were also opened for temporary exhibitions.

Exhibits of the Museum of Oriental Art

The Museum of Oriental Art in Turin seeks a broader view of the artistic work of Asian countries. Here you can find the most important cultural and artistic traditions of this continent. The interior of the museum, despite the age of the room, is very modern and stylized for the respective regions, which are the birthplace of the exhibits. The permanent exposition is located on 4 floors and includes about 2200 works from different Asian countries. It is divided into 5 galleries, corresponding to different cultural areas:

Temporary exhibitions devoted to the countries of Asia are regularly held in the museum. There are educational programs for schools and scientific research.

The Museum of Oriental Art is located in the administrative center of Turin, on Via San Domenico, 11. Nearby there is the City Tower, the Museum of School and the Holy Shroud Museum, as well as numerous palaces from the 17th and 18th centuries. The nearest public transport station – Corte D'Appello – is 2 minutes away on foot. It can be reached by tram № 4, and buses № 11, 19, 27, 51, 57, 92, N04, STAR2, W60.

Admission: the price of the full ticket is 10 euro, with a discount – 8 euro. The latter is valid for students (18-25) and pensioners (over 65). For schoolchildren and children under the age of 18 – admission is free. Also, the entrance is free for all visitors on the first Tuesday of the month (if it is not on a public holiday). Data of April 2018.