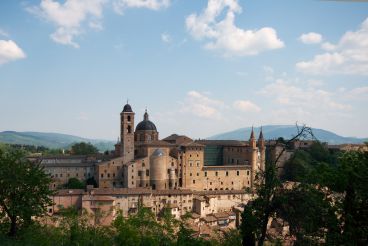 While visiting Urbino, it is practically impossible to leave its most significant landmark out of your trip – the Ducal Palace (Palazzo Ducale). Situated on the high ground this fortress that once was supposed to be a residence can be considered some kind of a real town by itself today. The palace was designed and built by different architects and sculptors for long years; it also houses museums, libraries, churches and other buildings. Here visitors can both enjoy fancy Renaissance architecture and learn about paintings and sculptures created by great artists.

History of the Ducal Palace

The Ducal Palace’s history started in the 15th century. However, the residence wasn’t built from scratch. The place for the future palace was occupied by a small building that was created for Count Antonio II da Montefeltro. When his grandson Federico came to power, the construction resumed. As a result, a three-story house appeared in the mid-15th century.

Later on, the architect named Luciano Laurana took charge of the project. Then it was decided to make the residence luxury and suitable for big upper-class meetings. New design connected all existing buildings. New halls, libraries, courtyard were created, walls were fortified. Moreover, a so-called Torricini façade was built at this very time – three beautiful arches with two tall towers on each side.

Francesco di Giorgio Martini continued the work after Laurana. Thanks to him all the constructions were finished, gardens were planted, water systems and stables were created. A huge ramp was made as well which allowed horses to reach the palace. The interior was decorated by sculptor Ambrogio Barocci which resulted in Palazzo Ducale being full with exquisite furniture and tapestries.

Further progress with the palace was made under the guidance Filippo Terzi and Bartolommeo Genga during the first half of the 16th century.

In 1889–1997 the Institute of the Book Illustration and Decoration was set here. The building has also been housing the National Gallery of the Marche since 1912.

Places to see at the Ducal Palace

The palace itself is considered to be a work of art and the most interesting exhibit accordingly. Besides the architectural aspect there are other places that will draw your attention:

Opening hours: Palazzo Ducale is open for visitors from 08:30 till 19:15 from Tuesday to Sunday and till 14:00 on Mondays. The ticket office closes one hour before the closing time. The palace is closed on December 25 and January 1.

Raphael's House can be visited:

Admission: the full ticket costs 8 euros, reduced one – 5 euros which can be purchased by the people between the ages of 18 and 25. Persons under 18 are free of charge. The entry is also free on the first Sunday of the month. Data may may be changed.