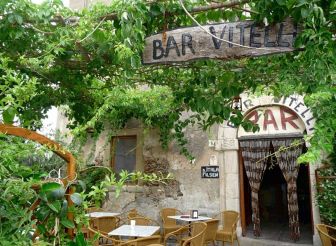 Italy has gained fame for its picturesque villages. One of them is Savoca. Everything here is buried in verdure and flowers. Its streets are clean and uncrowded, here you can see peachpuff-coloured villas. Savoca is home to the famous Bar Vitelli. In 1971, a few scenes of The Godfather were filmed on the terrace of this bar. Here, the film's hero Michael Corleone asked for a hand of Apollonia, the owner’s daughter. The bar is small inside. Except for modern chairs and tables, the bar resembles the one, filmed in The Godfather’s scenes. Its walls are decorated with old photos of Sicilian movie scenes that were filmed in Savoca. You can also see different posters, the family tree of the Corleones, and the lupara, a sawed-off shotgun – the symbol of the Sicilian Mafia – located next to the bar on the wall. The building, which houses the famous bar, is one of the oldest houses of Savoca. It was built in the late 17th – early 18th centuries by a rich family. By the name of the owners, the building became known as Palazzo Trimarchi. Later the building was restored. When The Godfather came out, the bar was called after Vitelli, the father of the bride of Michael. Once you find yourself travelling through Italy, you are well advised to include this village and Bar Vitelli to your itinerary.
Посмотреть отели рядом
Follow us on social networks
Facebook ()
Address:
Savoca, Messina, Italia
Bar Vitelli on the map
Votes: 0
0
Show hotels near
All Bars and pubs Italy
Add place's description
Send Ok
Feedback