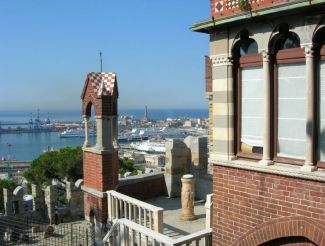 Albertis Castle in Genoa (Castello d'Albertis) is a historic mansion built in medieval style, located on the hill of Monte Galletto, in the north-west of Italy. Previously it belonged to the famous Italian captain and yachtsman Enrico Alberto d'Albertis, and after his death it was transferred to the city. Currently, the castle houses the Museum of World Cultures.

The Albertis Castle was built between 1886 and 1892 by the architect Alfredo d'Andrade, in the place of the city fortification of the 16th century. The architect managed to establish his project on the foundation of the city and also to include and preserve a bastion and one of the towers of the wall in the composition of the castle.

The building was created in the Neo-Gothic style with the elements of early Renaissance. The palaces in Florence and castles of the Valley d’Aosta inspired D'Albertis to create his own castle. Albertis Castle was the first villa built in the form of a mansion in Genoa.

The grand opening of the mansion was held in time of the 400th anniversary of the discovery of America by Columbus.

Captain Enrico Alberto d'Albertis is a famous Italian navigator, who served in the Royal Navy of Italy, then in the Merchant Navy of the country. In 1879 he created the first yacht club in the country, from that day he decided to devote himself completely to yachting.

During his trip to San Salvador, on two boats Enrico d'Albertis with the help of self-made navigational instruments followed the route of Columbus.

The captain rounded the globe three times and sailed around Africa. Also with the support of a geologist and archaeologist Arturo Issel he conducted a number of archaeological excavations.

Collection of the Museum of World Cultures

Since 2005, the Museum of World Cultures is situated inside the walls of the castle d'Albertis in Genoa. The collection includes archaeological and geological finds collected by Enrico and Luigi Maria d'Alberti during their voyage to Africa, America (from Canada to Tierra del Fuego), New Guinea and Oceania.

In the museum you will see:

The exposition includes various models of ships, yachts, navigational instruments, photographs and books from the personal library of d'Albertis.

The Albertis Castle is located in Genoa, in the northern part of the historic center of the city. You can get to the castle using the following means of transportation: